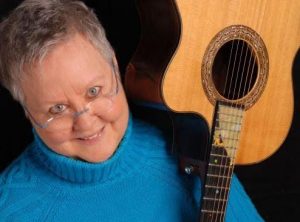 The Folk Music Society of Huntington’s First Saturday Concerts series will feature Christine Lavin on January 4, 2020. The 8:30 p.m. concert at the Congregational Church of Huntington (30 Washington Drive, off Route 25A, Centerport) is preceded by an open mic at 7:30 p.m. Tickets, priced at $25 ($20 for FMSH members) may be purchased online at www.fmsh.org using a credit card or at the door (cash and checks only).

Since emerging from the New York City singer-songwriter scene in the late 1980s, Christine Lavin has established herself as one of the most entertaining, witty, insightful, and engaging folk artists.

While working as a waitress at the famed Caffe Lena in Saratoga Springs, NY in 1975, she met Dave Van Ronk, who encouraged her to relocate to NYC so that he could teach her how to play her guitar properly. She’s performed concerts across the U.S., Canada, and points beyond; recorded 24 solo albums, and produced ten compilations (including the popular On A Winter’s Night that spawned a number of multiple artist tours). Lavin also was the creative force behind The Four Bitchin’ Babes, wrote an award-winning “mem-wha?” entitled Cold Pizza for Breakfast, hosted a radio show on WFUV, and was the keynote speaker at the 2016 Northeast Regional Folk Alliance (NERFA) Conference.

Her latest album, The Best of Christine Lavin, features two new songs and 18 of her most popular ones from 1983-2019. She started creating videos for her songs in 2011 and now also creates them for other artists as well.

Lavin will host a knitting circle at 7 p.m. (preceding the concert) and a Downton Abbey-style napkin-folding session during the intermission between her two 45-minute sets.

Founded in the late 1960s, the Folk Music Society of Huntington (www.fmsh.org, 631-425-2925) presents two monthly concert series, a monthly folk jam, and an annual folk festival in conjunction with the Huntington Arts Council.

Here are a few video links: