December 30, 2019 8:04 pm | Filed under: Environment,Events,Government,History,Investigations,News | Posted by: The Huntingtonian Staff 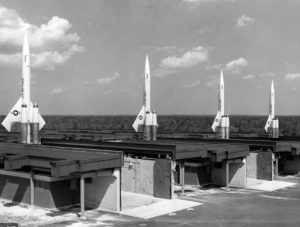 December 5, 2019 by the New York State Department of Environmental Conservation that the former BOMARC Missile Base is being considered as a potential inactive hazardous waste disposal site, known more commonly as a New York State “superfund” site. The property, located on Old Country Road in Westhampton, will be listed on the New York State Registry of Inactive Hazardous Waste Disposal Sites if it is determined that hazardous waste disposed on the property poses a significant threat to public health or the environment.

The BOMARC site, which comprises approximately 186 acres, is being investigated as the result of the detection of per and polyfluoroalkyl substances, or PFAS, in samples from both private wells and on-site groundwater monitoring wells and polychlorinated biphenyls, or PCBs, in soil samples collected on the site by the Suffolk County Department of Health Services.

PFAS are man-made chemicals that have been used worldwide since the 1950s in such products as non-stick cookware, water-repellent clothing, stain resistant fabrics and carpets, some cosmetics, and products that resist grease, water, and oil. PFAS manufacturing and processing facilities, airports, and military installations that use firefighting foams are some of the main sources of PFAS. Perfluorooctanoic acid (PFOA) and perfluorooctanesulfonate (PFOS), the most studied PFAS chemicals, have been voluntarily phased out by industry in the United States, though they are still produced internationally and can be imported into the U.S. in consumer goods. PFAS are also persistent in the environment.

PCBs are chemicals that were used in industrial products such as electrical insulators, capacitors, electric appliances, hydraulic and microscope oils from the 1920s until banned in 1979 amid concerns that they could have unintended impacts on human and environmental health. PCBs enter the air, water, and soil during manufacturing and use. Wastes from the manufacturing process that contained PCBs were often placed in dump sites or landfills.  Because PCBs bind strongly to soil, their detection in groundwater is very rare.

The BOMARC missile base was operated by the U.S Air Force as one of ten Boeing and Michigan Aeronautical Research Center facilities protecting the east coast from a potential Soviet air attack from 1959 until it was decommissioned in 1964. Fifty-six nuclear-tipped missiles were located at this facility. After decommissioning, the property was turned over to Suffolk County.

Suffolk County has since utilized the property for storage of automobiles involved in serious accidents, as a law enforcement shooting range, and as a vehicle training course for emergency responders, among other uses.

The Suffolk County Department of Health Services began a survey and investigation of private wells  in  Westhampton in 2017 following the detection of PFOS in a Suffolk County Water Authority Old Country Road public supply well located immediately south of the former BOMARC facility. The public water supply in this area currently meets all existing drinking water standards, as well as proposed maximum contaminant levels for PFAS and 1,4-dioxane.

Fifty-four properties utilizing private well water were identified in the survey area. Two of the private wells were found to contain PFOS/PFOA at levels exceeding the United States Environmental Protection Agency health advisory level (HAL) of 70 parts per trillion and 11 more wells were found to contain PFOS or PFOA at levels exceeding the proposed state maximum contaminant level (MCL) of 10 parts per trillion.  NYSDEC has installed treatment systems and continues to monitor the two homes with PFOS/PFOA detections above the HAL. Bottled water continues to be made available to private well owners in the survey area out of an abundance of caution. Any property in this area that is currently using a private well for drinking water should contact the Suffolk County Department of Health Services at 631-852-5810 to have their water tested if they have not already done so.

It should be noted that given the large private well survey area, there are several sites in the area that may be potential sources of PFAS groundwater contamination.

In addition to the private well survey in the vicinity south of the BOMARC facility, the Suffolk County Department of Health Services conducted an initial environmental assessment of the site pursuant to Resolution 1065-2018 of the Suffolk County Legislature. The resolution directed the department to survey the BOMARC property and initiate preliminary soil and groundwater testing at the site to determine if there are any health or environmental issues that may require remediation.

In accordance with the resolution, the Suffolk County Department of Health Services collected numerous soil and groundwater samples at the BOMARC site.  County health officials have shared preliminary data with the NYSDEC and are currently compiling and reviewing all data. Potential sources of PFAS and PCBs on this site are currently unknown; however, in consultation with the NYSDEC, Suffolk County Department of Health Services will develop a plan for additional investigation of the site.

In addition, the Suffolk County health officials performed a limited site evaluation of soil at the BOMARC facility in areas of concern.  During this initial assessment, 16 soil samples were analyzed for PCBs.  Four surface soil samples exceeded NYSDEC commercial use soil cleanup objectives of one part per million (1 ppm) for PCBs, with levels ranging from 5.6 to 10.5 ppm; no samples exceeded the industrial soil cleanup objective of 25 ppm.  Of the four soil samples, three were in the vicinity of the firing range and one was a parking lot used for vehicle storage.  In addition, five sediment samples from below-grade structures exceeded NYSDEC cleanup objectives for PCBs.

Suffolk County plans to conduct additional soil sampling to further delineate the extent of the PCB contamination.  Suffolk County health officials have consulted with state health officials regarding the PCB levels, current site use, and precautions being taken at the site. No immediate action is indicated at this time.  The County has also begun consultation with the New York State Public Employee Safety and Health Bureau for review and further guidance. County officials will inform the community and users of the BOMARC facility if there are any new developments.

For information about EPA Health Advisories for PFOA and PFOS in Drinking Water click here.

Residents who are unsure if they are served by public water may call the Suffolk County Water Authority at 631-698-9500.

Residents with private wells who have questions about private well water in Suffolk County or who wish to have their wells tested may contact the SCDHS Office of Water Resources at 631-852-5810.