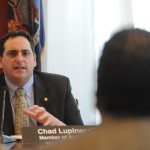 After years of delays, motions, documents, cancellations, with documents going back and forth, the alleged sexual assault trial will begin against the Town of Huntington Supervisor Chad Lupinacci, in February 2021 which is next month. The sexual assault alleged is that Supervisor Chad Lupinacci forced sexual assault upon his Chief of Staff while a New York Assembly member.  Lupinacci had issued a denial upon the original lawsuit filing in December of 2018.  Now it appears based on discovery filings that Finnegan’s explicit details in the lawsuit ALSO have pictures as proof of his allegations. We have not heard a word from the Supervisor.  Lupinacci has also had the cover of Covid-19 to hide behind, as all meetings since March have been on ZOOM. We have heard from citizens that they have so many questions they want to ask the Supervisor about this issue. Some newer possible sexual issues may have happened to a town employee as well as Finnegan. See town resolution 2020-184.

See documentation below from the court proceedings and the numerous motions and meetings and documents.

Town resolution 2020-184 (read here) is also another investigation into behavior unbecoming of a public official that asks for an attorney to investigate what is believed to be the Supervisor based on town hall sources.  You the taxpayer have paid $20,000 for this. At the December 15, 2020 town meeting, Huntingtonian’s  got the answer to $20,000 question.  The town board agreed to release the findings at that meeting. However we may never know because it was a personnel matter, the names will be redacted, thus leaving only speculation into this. There is an actual town employee who could be scared to go after this.  Our understanding is that person has resigned and has moved to another private job.

Note: Once could be a mistake, twice is a problem. So the question needed to be asked are there any others out there that were treated the same way?  The supervisor has been a professor at a local College. Are there students there that have had a similar problem? One has to ask.