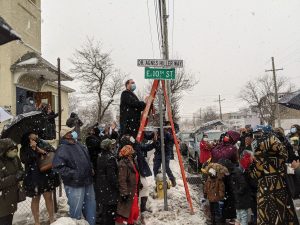 “There is no one more deserving of such an honor than Dr. Agnes Hiller and the personal sacrifices and immeasurable contributions she made to the Huntington Station and greater community throughout her life, in service of God and the greater good,” said Supervisor Chad A. Lupinacci, who likened the snow and rain outside, moving the occasion indoors, to holy water sent from “Mother” Hiller to bless the ceremony. 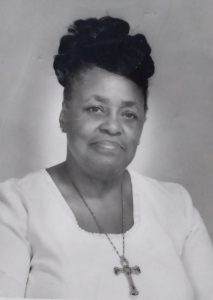 Councilman Mark Cuthbertson stated, “Naming E 10th street in honor of Dr. Agnes Amelia Hiller is a fitting tribute to a great woman whose work touched so many lives in our community. Thank you to Rev. Bernadette Watkins for working together with the Town to make this happen.”

“Mother Hiller was a remarkable human being.  Her generous heart impacted many.  Her commitment to helping others will be remembered for generations to come,” said Receiver of Taxes Jillian Guthman. “The renaming of East 10th Street, Huntington Station is a fitting acknowledgement of a woman who prioritized helping others in crisis and whose legacy will live on in all of those that she prayed for, mentored, cared for as well as those who had the privilege of observing her acts of love and generosity.”

“It was wonderful to pay tribute to the life and legacy of Dr./Reverend Mother Agnes Hiller at the Mt. Calvary Holy Church of Huntington during Black History Month.  I was honored to have the Highway Department play a small part of Dr. Agnes Hiller’s ceremony and provide the street signs for this heartfelt dedication,” stated Highway Superintendent Kevin Orelli.

Dr. Agnes Hiller’s daughter, Rene Sykes, stated, “The family of Mother Hiller was pleased to have this loving Woman of God honored. She loved everyone and would always say, ‘I may not like what you do but I will always love you!'”

In addition to the Supervisor and Town officials, the Town was also represented at the ceremony by Town Historian Robert Hughes and Irene Moore, Chairperson, African American Historic Designation Council.

At their September 2019 meeting, the Town Board officially recognized Mother Hiller’s untiring work to improve the lives of residents of the Huntington Station community by renaming the block of East 10th Street, from New York Avenue to First Avenue, in Huntington Station as East 10th Street/Dr. Agnes Hiller Way. A street dedication ceremony was planned for May 2020 but the COVID-19 pandemic forced the event’s postponement.

Agnes Hiller was born in 1904. As a young woman in 1932, she became one of the first members of the newly formed Mt. Calvary Holy Church of Huntington. She later became assistant pastor and then was named pastor of Mt. Calvary Holy Church soon after the church relocated to its present location at East 10th Street. She served as pastor until she retired in 1994 at the age of 90.