“Recreational activities, such as beach bathing, walking, jogging, fishing, boat and kayak landing and dog walking can have significant unintentional consequences for the birds,” said Supervisor Chad A. Lupinacci. “Many people don’t realize the danger posed to these birds and their nests from simply walking on the sand near the shoreline. A Piping Plover nest is well-camouflaged and blends in with the rocks and shells in the sand.”

Councilman Ed Smyth stated, “These birds’ nests are very easily missed and can be stepped on, and that’s one of the reasons why we are asking the public to be aware of this and to keep their dogs away from the beaches.”

Steve Sinkevich, Senior Fish and Wildlife Biologist with the U.S. Fish and Wildlife Service, said, “On behalf of the U.S. Fish and Wildlife Service, I wanted to thank & recognize the Town of Huntington, including the Department of Maritime Services, Field Crew and Town Supervisor Lupinacci for their efforts and support in protecting federally and state-listed shorebird species at Hobart Beach. We’ve been partnering with the Town to protect and facilitate successful shore breeding and promote the recovery of these species for almost 20 years and we support the Town’s efforts to improve breeding success at this site. We again thank the Town and look forward to continuing our partnership in shorebird recovery at Hobart Beach.”

The Town of Huntington’s Hobart Beach is an important place for migrating shorebirds that need places to rest, feed, nest and raise young. As part of a goal to allow recreational use while protecting some areas for shorebirds, the Town has designated the central and southern portions of Hobart Beach as the Sarah H. Ruppert Water Bird Park Preserve. 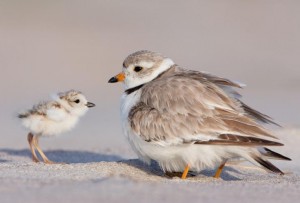 In 2020, the Town began the seasonal process of closing the area of the beach and the preserve located south of the parking lot during the shorebirds’ mating season, which takes place from early April through August. Incidents of trespassers trampling the endangered birds’ nests prompted the new annual closure.

Beachgoers on foot, dog-walkers and boaters arriving by sea threaten the endangered habitat. Shorebirds’ nests and eggs are well-camouflaged and difficult to see (see photo attached). While this makes it harder for predators to find nests, people may not see them either. If left unprotected, people may accidentally step on eggs or remain too long in the vicinity, keeping incubating adults off their nest. Research shows that recreational activities, such as beach bathing, walking, jogging, fishing, boat/kayak landing and dog walking can have significant unintentional consequences for the birds. Birds may abandon nests, get separated from their chicks, be more vulnerable to predators or unable to feed. Nests that are not tended to by adults will fail. Even well-behaved dogs frighten plovers and other shorebirds. All dogs are seen as predators, and birds panic when a dog or person approaches their nest or chicks. Research shows that shorebirds abandoned their nests after being disturbed by a dog. Additionally, Town Code prohibits dogs leashed and/or unleashed on all town beaches except for paved areas and boardwalks.

The Town of Huntington, volunteers, the New York State Department of Environmental Conservation and the U.S. Fish and Wildlife Service work cooperatively on monitoring and managing federally and state-listed shorebirds at the bird preserve. While the U.S. Fish and Wildlife Service and the Town of Huntington install temporary fencing to keep beachgoers out of the protected area, many patrons ignore the fencing or leave behind garbage or food waste that attracts predators. The Town of Huntington Department of Maritime Services beach staff recently conducted a massive cleanup of trash from the preserve, which either washed up during hide tides or were discarded by beachgoers.

The Town of Huntington worked with the U.S. Fish and Wildlife Service to produce an informational resource, which explains the importance of protecting the habitat at the Sarah H. Ruppert Water Bird Park Preserve located at Hobart Beach in Eaton’s Neck.