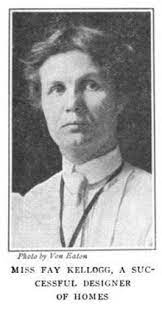 Town of Huntington officials were joined by members of the Greenlawn-Centerport Historical Association for the unveiling of an historical marker on April 6, 2021 honoring former resident Faye Kellogg, the foremost woman architect of the early twentieth century at the site of a residence and former post office she designed at 22 Boulevard Avenue in Greenlawn.

“Fay Kellogg designed and built steel construction projects while simultaneously breaking glass ceilings,” said Supervisor Chad A. Lupinacci. “We are proud to pay homage to Fay Kellogg, a pioneer in the field of architecture from over a century ago, at the site of the residence and former post office she was commissioned to design in 1911.”

Councilman Ed Smyth stated, “Fay Kellogg is an inspiration to professional women of all ages. She fought gender discrimination by setting goals staying focused on them.  She considered herself an equal to her male colleagues and accepted no concessions from them due to her gender.  She allowed her work product to speak for itself.”

Councilman Mark Cuthbertson said, “Fay Kellogg was not only an accomplished architect but a champion for women’s suffrage and for women’s equality at the workplace. On this Women’s History Month, I am proud to recognize Fay Kellogg as one of Huntington’s finest residents and hope we carry on her legacy.”

“It’s wonderful that the Greenlawn-Centerport Historical Association was able to secure a grant funded by the William G. Pomeroy Foundation to honor Fay Kellogg.  Fay Kellogg was not only a pioneer as a female architect but an advocate of women’s rights.  As a Greenlawn resident, I am proud to know she summered in our community,” stated Councilman Eugene Cook.

Councilwoman Joan Cergol stated, “I am honored to help celebrate the legacy of Fay Kellogg, whose contributions as an architect are surpassed only by her contributions as a pioneer for all working women in America. This marker, representing the old Greenlawn Post Office as designed by Ms. Kellogg, is testament to the power of the human spirit when we refuse to let others tell us what we can or cannot do.”

“Today’s unveiling ceremony showcases the historic impact Fay Kellogg continues to have on the Town of Huntington. Preserving the Town’s history and heritage is vital, and thanks to the hard work of the Greenlawn-Centerport Historical Association in securing this historical marker, the contributions of Fay Kellogg will be forever remembered,” said Town Clerk Andrew P. Raia.

Superintendent Kevin S. Orelli stated, “It is nice to be a part of recognizing pioneering women of the past. Fay Kellogg had the courage and audacity to challenge the norms of the time and succeed in a big way. We should all be proud, especially the residents of Greenlawn, that Fay chose our area to spend her summers.”

Receiver of Taxes Jillian Guthman said, “Fay Kellogg, like so many women, has fought to defy stereotypes. As women, we rise above stereotypes by excelling. Today our community can see that we are stronger when women have access and opportunity. We are collectively our best when decisions are based on talents verses chromosomes. Together we can do great things here in Huntington and beyond.”

“Fay was a trailblazer, ahead of her time, and should be remembered for her many accomplishments. One of her greatest loves was the summer home that she designed and built here in Greenlawn where she took great pride in putting on a pair of Khaki pants and farming the 15 acres herself,” said Deanne Rathke, Director, Greenlawn-Centerport Historical Association. “As an advocate for women’s rights her words can still serve as an inspiration to women today as she once said ‘I don’t approve of a well-equipped woman creeping along; let her leap ahead as men do. All she needs is courage.'”

In a statement read by Supervisor Lupinacci, Paula Miller, Executive Director of the William G. Pomeroy Foundation said, “At the Pomeroy Foundation, one of our main initiatives is to help people celebrate their community’s history…we commend you and extend our appreciation to the Greenlawn-Centerport Historical Association; the Greenlawn community and the Town of Huntington; and all those involved with obtaining this marker. We know that it will stand as an enduring testament of her pioneering legacy in architecture for generations to come.”

The historical marker was funded by a grant, secured by the Greenlawn-Centerport Historical Association, from the William G. Pomeroy Foundation.

Fay Kellogg (1871-1918), a summer resident of Greenlawn, was considered the leading woman architect of her day and an advocate of women’s rights, including the right to vote.

Kellogg was born in Pennsylvania and studied in Washington, D.C. and at Pratt Institute in Brooklyn.  She continued her studies in Paris.  Through her efforts the prestigious Ecole des Beaux Arts was opened to women, but only after she had completed her studies elsewhere.

She joined the practice of New York architect John R. Thomas, where she helped design the Hall of Records on Chambers Street in Manhattan.  After Thomas’s death, she set up her own architectural practice in 1903.  She designed numerous buildings in New York and also a skyscraper in San Francisco as well as “hostess houses” on military bases in South Carolina, North Carolina, and Tennessee during World War I.  She was the lead architect for all building projects nationwide for the American News Company.  She usually supervised the construction of her designs.

In 1907 and 1909, Kellogg purchased land in Greenlawn totaling 15 acres.  She spent six months a year in Greenlawn, raising chickens and commuting into the city.

In 1911, Kellogg was commissioned to design a new home and post office for Greenlawn’s postmaster Elizabeth A. Hilton near the entrance to the new train station on Boulevard across from the firehouse.  The bungalow provided living quarters for Hilton as well as space for the post office.  Following Hilton’s death in 1919, the building was sold to her sister Sarah Hilton.  The building continued to be used as the post office until as late as 1929.  The building is now a residence.

Fay Kellogg died at the age of 47 in her Brooklyn home in July 1918, after falling ill in the spring of 1918, when the Spanish Flu was first identified in U.S. military camps; army personnel were among the first U.S. casualties of the pandemic. While her obituary states that she “had a breakdown” working on the construction of hostess houses at Camp Gordon in Atlanta, it has been speculated that Kellogg was a victim of the deadly flu of 1918. 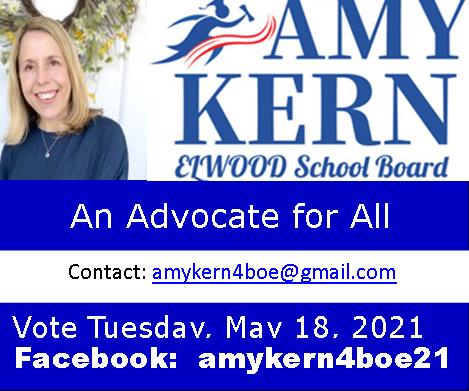