Monday June 7, 2021 at 3:00p.m., Councilman Eugene Cook and the Huntington Town Board will gather with former Huntington Highway Superintendent William Naughton and his family to unveil the street sign which will dedicate Rofay Drive in East Northport as William Naughton Way.  The resolution was passed at the March 16, 2021 Town Board meeting, and was sponsored by Councilman Cook. 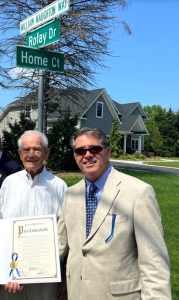 Former Huntington Highway Superintendent William Naughton was born in County Roscommon, Ireland and immigrated to the United States in July 13, 1963.  With a mere $600 in cash, William rented an apartment not far from the Bronx Zoo and a year later he purchased a home in Huntington Station.  After working for Leviton in Melville, he purchased a new pick-up truck with a friend in 1969 and launched a landscaping business that he ran for 18 years until William Naughton was elected to the position of Huntington Highway Superintendent in 1987 and served the Huntington community until December 31, 2013. 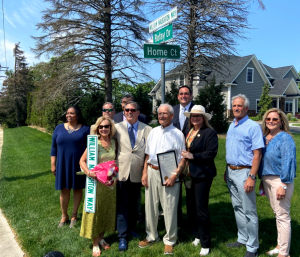 “I believe it is a fitting honor to rename Rofay Drive in dedication to our former Highway Superintendent William Naughton as a tribute to his 26 years of dedication and service to the people of Huntington; the community he loves and calls home. “, stated Councilman Eugene Cook “Bill was a leader who cared about what was right, he looked out for the residents of Huntington.  That is why I proudly call Bill Naughton a friend.”

The dedication ceremony will be held on Monday June 7, 2021 at 3:00 P.M. at the intersection of Rofay Drive and Home Court, which is by the Elwood Highway Facility.