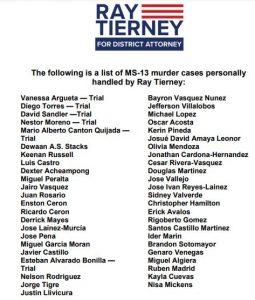 Tierney explained today that, since Sini was sworn into office as District Attorney on January 2, 2018, he has put out 10 press releases announcing the indictments of 108 MS-13 gang members, but after those initial announcements, there have been relatively few releases, statements, or commentary of any kind on the final disposition of these MS-13 gang cases, with the DA’s Office going so far as to seal sentencing information and seek to impose gag orders on the defense attorneys so no such sentencing information can get released to the public. Court documents reveal that the gang members have NOT been convicted of gang murder.

“Today, I pose a simple question. Since taking office, Tim Sini has held numerous press events self-anointing himself as the man who took down MS-13. What does he base this statement on? That he decimated MS-13. Tim Sini has claimed that he has arrested 300 MS-13 members since taking office. but he never gives any specifics. How many of these cold-blooded murderers have been convicted of gang murder and what were their sentences?” asked Tierney.

“I believe that there is very little substance behind the big words as the District Attorney has allowed these violent criminals to plea bargain to lesser crimes with lenient sentences under seal so they are soon out on our streets again. This is absolutely disgraceful! When I am elected your District Attorney, I will prosecute MS-13 members to the fullest extent of the law, as I have many times in the past. Tim Sini is satisfied with having MS-13 thugs spend months in jail. I will put them there for decades,” concluded Tierney, who has personally investigated and prosecuted hundreds of MS-13 members for gang murders involving approximately 50 separate victims on Long Island. 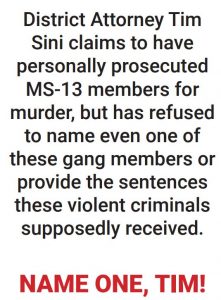 A video from Wednesday’s press conference can be found below: 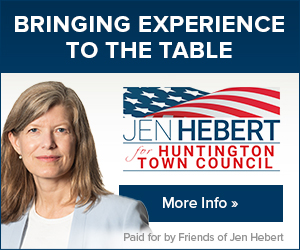