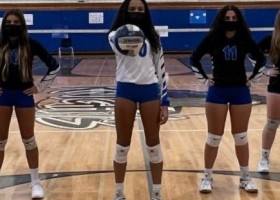 For the second consecutive year, Elwood-John H. Glenn High School’s girls varsity volleyball team finished the league season undefeated. The team will next compete in the county finals on Nov. 5, where they hope to repeat as champions.
“These girls have been working hard,” coach Nick Tremaroli said. “I have pretty much the same group of […]

Despite a touch of rain, the Elwood community and the students of John Glenn High School welcomed the return of homecoming on Oct. 23, 2021 proudly marching on the traditional parade route from James H. Boyd Intermediate School to the high school, led in turn by Greenlawn Fire Department trucks; local Boy Scouts and Girl […]

Dawn Valle was recently named the new director of math, science, technology and federal grants for the Elwood School District. She had served since 2014 as assistant principal at Elwood Middle School. Valle previously worked as a principal for the New York City Department of Education, an assistant principal and math staff developer at the […]

Julie Bilello was appointed as assistant principal at Elwood Middle School, replacing Dawn Valle, the district’s new director of math, science, technology and federal grants.
Bilello has worked as a special education teacher for the past 16 years, most recently at Elwood Middle School, and previously in the Lynbrook School District and Plainview Old-Bethpage School District. […]

Elwood Welcomes Back Students For An Exciting New School Year

September 15, 2021 2:13 pm Comments Off on Elwood Welcomes Back Students For An Exciting New School Year