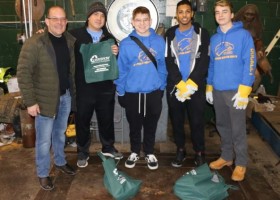 On November 2, 2019, teachers, principals, administrators and community members from […]

On Saturday, November 2, 2019 School-Business Partnerships of Long Island, Inc. (SBPLI) — also known as FIRST® (For Inspiration and Recognition in Science and Technology) Long Island — in cooperation with the Half Hollow Hills School District, will present the Eighth Annual Half Hollow […]

Half Hollow Hills is proud to announce that both Hills East and Hills West were ranked in the top 5% of high schools in the nation in the 2019 U.S. News & World Report Best High Schools rankings! The rankings include data on over 23,000 high schools nationwide, and rank 17,000 schools on six factors that […]

December 31, 2018 7:00 am Comments Off on Half Hollow Hills Receives Generous Gift From 9/11 Charity To Benefit Local Families In Need

December 26, 2018 6:00 am Comments Off on Half Hollow Hills Students Collect Holiday Gifts And Necessities For Local Families In Need

Students in Half Hollow Hills, from the kindergartners to the graduating seniors in the class of 2019, have been fundraising and running holiday gift drives to help local families in need. Different examples of service learning can be found at every building, but they all have the same goal: helping those that are less fortunate […]

Suffolk County Superintendents, administrators and PTA members are urging bi-partisan passage of IR 2128 in the Suffolk County Legislature that would restrict the sale of flavored vapor products in Suffolk County. The bill, which has been introduced by Legislator William “Doc” Spencer, is the latest […]

Half Hollow Hills Students Are Giving Back For Thanksgiving

November 22, 2018 12:00 pm Comments Off on Half Hollow Hills Students Are Giving Back For Thanksgiving

Groups of students in the Half Hollow Hills Central School District have been fundraising and collecting food to help local families who are food insecure enjoy a happy Thanksgiving. Food insecure families are never sure if they will have enough food to feed their family from week to week, and it continues to be a […]