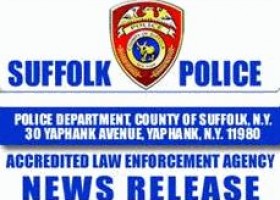 Suffolk County Police early this morning arrested a man for driving while intoxicated after he crashed his motor vehicle into the rear of a marked police car in Huntington.
A Second Precinct officer initiated a traffic stop of a 2005 Chrysler Pacifica on eastbound Pulaski Road, near Frazer Drive, at approximately 12:20 a.m., 01/01/2021.  The officer […]

December 26, 2020 6:02 pm Comments Off on Gershow Recycling Donates Use of Wrecked Vehicle to Town of Huntington for Anti-Drunk and Distracted Driving Campaign

Gershow Recycling recently donated the use of a wrecked car in support of the Town of Huntington’s Anti-Drunk and Distracted Driving Campaign. Presented by Mark Cuthbertson, Councilman, Town of Huntington, and the Huntington Town Board, the program reminds residents of the dangers of drunk or distracted driving during the holidays.
Kevin Gershowitz, President, Gershow Recycling, took […]

December 20, 2020 5:36 pm Comments Off on SCPD Updates Operational Changes Due To Rise in COVID-19 Infection Rate

In response to the increase in COVID-19 cases, the Suffolk County Police Department is once again enacting operational changes in an effort to limit person-to-person contact beginning on December 14, 2020.
Precincts will remain open 24 hours a day, 7 days a week but the department is encouraging people to not visit precincts unless critically necessary. Fingerprinting […]

Woman Shot Before Being Involved in Single-Vehicle Crash

June 1, 2020 5:35 pm Comments Off on Woman Shot Before Being Involved in Single-Vehicle Crash

Suffolk County Police Second Squad detectives are investigating an incident in which a woman was shot, then involved in a single-vehicle crash in East Northport this afternoon.

Second Precinct officers responded to a report of a crash in front of 319 2nd Street at 4:27 p.m. When officers arrived, they found a female passenger of a […]

May 29, 2020 4:57 pm Comments Off on Two People Injured, One Seriously, in Single Vehicle Crash On a LaRue Drive, Huntington

On April 4th, 2020, at 5:10 p.m., the Greenlawn Fire Department was activated for a Motor Vehicle Accident at Clay Pitts Road and Manor Road North.  Responding units were advised by Suffolk Police enroute of one vehicle that was overturned with one person trapped. Response consisted of all four chiefs, paramedic, heavy rescue quint 2-7-2 and heavy rescue engine 2-7-6, ambulances 2-7-45, 2-7-25, and 2-7-5 […]

Sean Siegel, 32, of Huntington Station, has been identified as the bicyclist killed in a motor vehicle crash on December 20.

Below is the original release.

December 5, 2019 3:18 pm Comments Off on Woman Arrested for DWI After Crashing Into Unmarked Police Vehicle on Maplewood