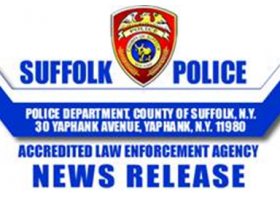 Suffolk County Police arrested a woman early this morning for DWI after she drove her vehicle into oncoming traffic in Commack, Wednesday, June 15, 2022 at 12:50 a.m.
Fourth Precinct officers responded to a 911 report of a Ford Expedition being driven eastbound in the westbound lanes of Jericho Turnpike at 12:50 a.m. An officer in a […]

Suffolk County Police today arrested a woman for unlicensed massages and prostitution during a raid at a massage parlor in Huntington, Friday, May 20, 2022 at approximately 6 p.m..
In response to numerous community complaints regarding illegal activities at Golden Finger Spa, located at 183 New York Ave., near Heckscher Park, Suffolk County Police Second Precinct […]

Suffolk County Police today arrested a teenager for possessing a loaded handgun in Huntington Station   Friday, April 15, 2022 at approximately 3:40 a.m..
Second Precinct officers responded after a 911 caller reported a group of teenagers, possibly armed with guns, in the area of Oakwood Road in Huntington Station. Officers canvassed the area and located the […]

March 28, 2022 6:19 pm Comments Off on Man with Gunshot Wound Arrested for Drugs After Crashing Motor Vehicle

Suffolk County Police last night arrested a man, who had been shot in the arm, for possession of drugs after he crashed his car in Melville Sunday, March 27, 2022 at approximately 8 p.m..

Daquan Cannon was driving a 2011 BMW sedan eastbound on the South Service Road, east of Broadhollow Road, when the vehicle veered […]

Suffolk County Police Sunday, March 6, 2022 at approximately 9:20 p.m.  arrested a man for Leandra’s Law for driving while intoxicated with a child in his vehicle following a crash in Huntington Station.
Denis Manzaneras-Orellana was driving a 2000 Honda sedan on East 10th Street, between Varney and Mulford Avenues, when he crashed the vehicle into an unoccupied […]

Part-Time Security Guard Allegedly Stole Nearly $4K of Assorted Tools
A Town of Huntington security guard was arraigned today for stealing tools from the town and selling them for profit, announced Suffolk County District Attorney Ray Tierney.
“Instead of safeguarding town property, Mr. Chura allegedly took advantage of his position to steal items from the town […]

Man Shot and Killed in Garage of Home In Melville

Suffolk County Police Homicide Squad detectives are investigating the shooting death of a man that occurred at a Huntington Station home.
A group of people were in the garage of the home at 57 Murdock St. at approximately 11:55 p.m. on October 27, 2021 when a group of people, at least one of whom who was […]

Suffolk County District Attorney Timothy D. Sini today announces the launch of the District Attorney’s Office of Immigrant Affairs (“OIA”), which comprises expert prosecutors and staff who will work with immigrant communities to […]

October 26, 2021 4:56 pm Comments Off on Man Arrested for Multiple Incidents of Making Graffiti

Following an investigation by Second Precinct Crime Section officers, Thomas Rivas was arrested for spray painting “Defund the Police” or “Defund Suffolk PD” on nine buildings between March and April 2021.

Wanted for Commack Hit and Run

A male was riding a black and yellow ATV on Whitetail Lane when his vehicle stuck a parked, unoccupied 2013 Jeep Wrangler on August 23 at approximately 7 p.m.