The Don Pius scholarship was established several years ago as part of a deal that the Town Board made with this notorious landlord.  Pius is especially well known in the Huntington School district since his more than 70 homes in that school district are eyesores in the community and have many school aged children living in them.  The excessive number of school children, which is likely a result of occupancy violations, costs the Huntington School district more than $3.5 million annually. Enough money to reinstate full day kindergarten many times over.

The more the Huntingtonian researchers investigate the relationship between Don Pius and the Town, the more disturbing the scenario becomes. Don Pius has made a fortune on the backs of the Huntington tax payers and has been “working the system” for decades.

As part of a deal to acquire 1264-1268 New York Avenue from Don Pius, a scholarship was set up in his name. Part of the agreement was that the Enrichment Center would be given a 10-year lease and a scholarship fund would be established with the proceeds from two apartments above 1268 New York Avenue. The plan included reopening the Enrichment Center and opening a Business Incubator, which after several years is still not opened.  We are not even sure why it was necessary to acquire this property for the Enrichment Center because the same services are offered at the Tri-CYA which is a much larger and more suitable facility.  One negative factor about the Tri-CYA facility is that it is located behind the Big H shopping center and unless you know it is there, it is difficult to find.  This problem could have been resolved with adequate signs, advertising, and flyer’s sent home in school folders, which would have been far less costly to taxpayers that the exorbitant amount of  tax dollars that have been spent on purchasing and renovating the Enrichment Center.  The rehabilitation of the property was facilitated by the Town of Huntington Community Development Agency (CDA). The building was renovated with funds from the New York State Main Street Program, a Community Development Block Grant from the U.S. Department of Housing and Urban Development, RD Management and the Huntington Environmental and Open Space funds.

We want to be clear that we are not belitting the services provided by the Enrichment Center, but there is a larger facility with a caring and dedicated staff  known as the Tri-CYA in the same community.  In a community that is in desperate need of revitalization, perhaps these scarce tax dollars could have gone to better use such as down payment assistence to help sell the many homes for sale in the area or to help with business start-ups.  Evaluating the motives behind the purchase of the property and the specifics of the deal is a story for another day.

Here are the facts regarding the Don Pius Scholarship and the property at 1264-1268 New York Avenue:

Don Pius does not contribute a dime to the scholarship.

Don Pius or one of his family members presents the scholarship annually at a Town Board meeting.  Each time this award was presented there were residents from School District 3 present for other reasons.  They were there to ask the Town Board for help with code enforcement, crime and over-occupancy issues that are plaguing their school district and community.  The Pius rentals are a large part of these problems.  This is the epitome of rubbing salt in the wounds of the disenfranchised Huntington Station/School district 3 residents.  During the presentation of the scholarships, residents remained polite and respectful for the sake of the scholarship recipients.

When it was purchased, the property was removed from the tax rolls.  CDA is listed as the owner of these properties. The Huntington School district is not receiving any money for the property.

The rent is paid for through the Section 8 program.  We believe that the rent is going to either the CDA or HHA but so far, our FOIL requests have been ignored.

The scholarship is being paid for with the rent that is collected from the apartments that are located there.  Since our FOIL requests continue to be ignored, we are not sure exactly which Town agency is collecting the rent and how much they are collecting.  We do know that the money is not going to the school district to help subsidize the cost of educating the children who live there.

Five $2,000 scholarships in Mr. Pius’ name, are awarded to qualifying students who meet a specified criteria including academic excellence and good character through exemplary family and community service. One of the requirements to be eligible for the Don Pius Scholarship is to have good character.  We find this ironic. 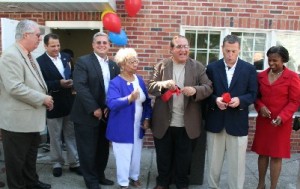 Before Picture - Enrichment Center in Aug. 2008 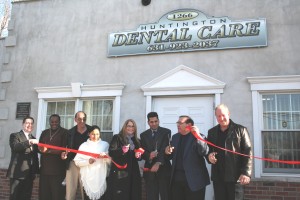 One Response to Taxpayers Subsidize The Don Pius Scholarship