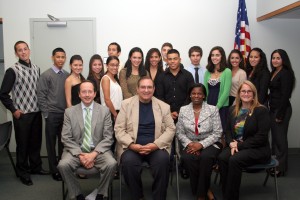 Huntington, NY – More than 200 people joined with the Huntington Town Board and members of the Town’s Hispanic Task Force Friday, Oct. 14, 2011, at the 17th Annual Hispanic Heritage Celebration Program, an evening marked by performances of Peruvian music, the enjoyment of ethnic foods, a keynote address from the deputy presiding officer of the Suffolk County Legislature and the bestowing of honors on two distinguished community leaders and 20 high-achieving students.

The program included welcoming remarks from Supervisor Frank P. Petrone and members of the Town Council, as well as musical performances by the Huntington High School Chamber Choir and Theo Torres Peruvian Folklore.

The keynote address was delivered by Suffolk County Legislator Vivian Viloria-Fisher, a native of the Dominican Republic who came to the United States as a child and who became a U.S. citizen at the age of 18. Before becoming a legislator in 1999, Viloria-Fisher taught in Long Island school districts; as the keynote speaker, she bypassed the podium to speak directly to the audience, which included a considerable number of young persons, saying she found that most effective when she was in the classroom.

Two distinguished citizens were honored for their community contributions: Dr. Lehti Laas Ramos, who is serving her fifth year as an elected director of the Huntington Community First Aid Squad and who co-founded Huntington Station Happy Helpers, which has had seven events in which volunteers have helped plant over a thousand spring bulbs and hundreds of flowers along New York Avenue in Huntington Station; and Dr. Carmela Leonardi, who has been principal of Huntington High school for the past 10 years. Previously, Dr. Leonardi served as principal of Huntington Intermediate School when it earned a New York Excellence in Education Award.

Student Achievement Awards were presented to:

The event was sponsored by the Town and by United Healthcare, Community Plan.