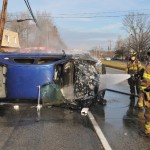 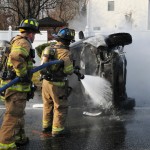 The Dix Hills Fire Department responded to a motor vehicle accident with a resulting fire after a Suzuki sedan struck a utility pole and overturned, bursting into flames on Deer Park Avenue near Yorktown Road in Dix Hills, Tuesday, January 17, at about 9:15 a.m. The female driver was pulled out by passersby following the crash, and was transported to Huntington Hospital with non-life threatening injuries by the Dix Hills Rescue Squad. The crash closed southbound traffic on Deer Park Avenue during the morning rush hour. The Dix Hills Fire Department was on the scene with two heavy rescue trucks, an ambulance, first responder unit and 25 firefighters/rescue personnel, under the direction of Assistant Chiefs Tom Magno and Tom Napolitano.