Whitman Students Pledge Not To Text While Driving

January 26, 2012 5:31 am | Filed under: Around Town,News,South Huntington Union Free School District | Posted by: The Huntingtonian 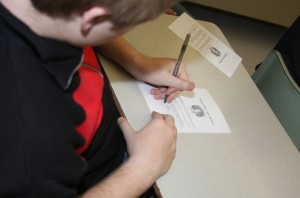 Walt Whitman’s driver education instructor, Mr. Samuel Levant, goes to all lengths to impress upon his students the dangers of distracted driving, with special attention to texting. Students recently watched a short film clip during which Alex Brown’s parents described what it was like to discover the wreckage of their car and tragedy of the loss of their daughter.

“We lost our daughter, Alex Brown, in a single car accident as she drove to what seemed like just another ordinary day of her senior year in high school,” they said. “Although no other vehicles were involved, Alex was not alone. The cell phone on which she had sent and received over 10,000 text messages in the weeks preceding her accident was with her. Alex lost her life to texting while driving.” Her parents describe the horror of their loss on the Remember Alex Brown website, http://rememberalexbrownfoundation.org/.
According to the National Highway Traffic Safety Administration, distracted driving is a dangerous epidemic on America’s roadways. In 2009 alone, nearly 5,500 people were killed and 450,000 more were injured in distracted-driving crashes.
Driving while texting may seem harmless, but it is far from that. The number of people impacted by this foolish decision grows every day. After showing the film clip, Mr. Levant led an open discussion with his Whitman students about what they had just watched and discussed the variety of other distracted-driving situations now being considered by the National Transportation Safety Administration to be included in a nationwide ban on any electronic device except a GPS to be active in a moving vehicle.
Whitman’s driver education students then decided to make a pledge not to text and drive, and each signed the “Remember Alex Brown” commitment: As you drive today, please put your cell phone away and drive safely. Your messages will be there when you arrive at your destination. Make sure that you arrive safely, too.
Story & Photo by Steve Bartholomew
Facebook Comments must be signed into Facebook