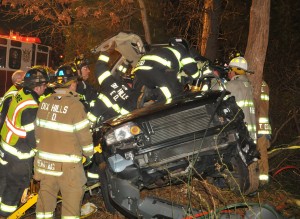 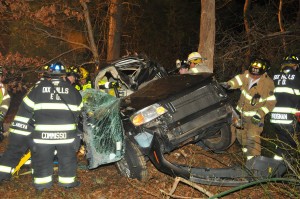 The Dix Hills Fire Department responded to extricate a woman trapped in a Mercury SUV that slammed into a tree on the Northern State Parkway. The accident happened Tuesday night at about 8:20 pm east of the Wolf Hill Road exit.  Dix Hills firefighters used multiple heavy rescue tools including the “Jaws of Life” to remove the four doors and roof of the vehicle to free the woman in a 20 minute rescue operation.

The victim sustained traumatic injuries and was airlifted to Stony Brook University Medical Center by Suffolk Police Medevac. The Dix Hills Fire Department was on the scene with 35 firefighters and rescue personnel, using three heavy rescue trucks, two ambulances, and a first responder paramedic unit, under the direction of Chief Richard Granahan. The crash resulted in the closure of eastbound traffic on the parkway at Wolf Hill Road.