New York is among the last states to do the redistricting required as a result of the 2010 census. There is urgency as the state’s Congressional primary is June 26, and the legislative primary is Sept. 11.

New York State Assembly and Senate leaders proposed new districts, but they were called gerrymandered to protect incumbents and it was claimed they were unfair to minority groups.

Judge Mann presented a final proposal to the three-judge panel that is overseeing a lawsuit challenging the redistricting process. The judicial panel wants to put a Congressional map in place by March 20, when the petitioning period for prospective House candidates is scheduled to start.

There are multiple competing proposals for Congressional districts (including one from Judge Mann) as well as state legislative districts.  Editorial boards and good-government groups, among others, are complaining about the process and the proposed maps.

It’s been hard for anyone to keep track of the various plans.  The people at the CUNY Center for Urban Research have published an online interactive mapping site to help us sort it out.  The maps on this page allow us to compare the proposals with existing districts and with each other.

The sites features are explained on this page.

We have set up some comparison maps for the Congressional Districts to save you some trouble:

As you can see there are a few different scenarios proposed. Since the State Senate and State Assembly do not agree on new district maps the maps proposed by Judge Mann will probably take effect.

There are a number of candidates and groups that are not happy with the Judges maps but they are better than some we have had previously. In 1992 over 2/3 of the Town of Huntington (and even a piece of the Town of Smithtown) was represented by Gary Ackerman from Queens as shown in the map below. This was a classic case of gerrymandering. 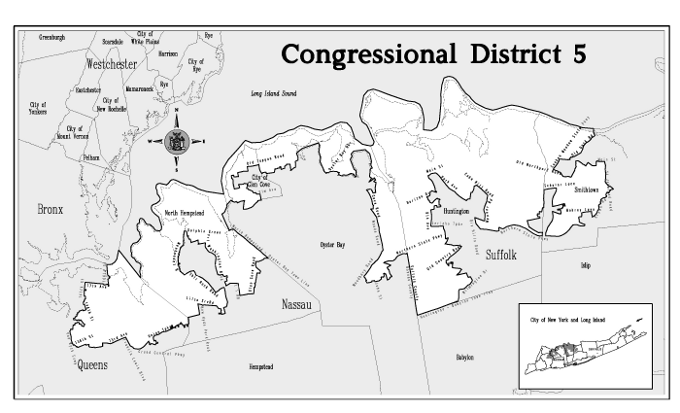 During the process of redistricting the data supplied by the following NYS agency is used: