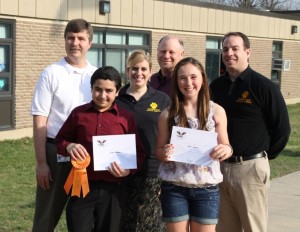 Commack Middle School students Joseph Materia and Alexa Svensson were selected as local honorees of the Prudential Spirit of Community Awards for their exemplary volunteer work. These outstanding, hard-working volunteers have now earned additional recognition as recipients of the President’s Volunteer Service Award. This award, presented on behalf of President Barack Obama, recognizes Americans who have volunteered significant amounts of their time to serve their communities and their country.

Joseph’s efforts have helped to provide lifesaving support for children around the world. He works hard to champion the United Nations Children’s Fund (UNICEF). Joseph is a self-starter who is not afraid to advocate for his cause. He posted flyers and collection boxes for UNICEF around the middle school, and raised over $230. UNICEF has also recognized Joseph’s leadership and efforts. He received a letter of praise from the organization, and was recognized as an honorary U.S. Fund for UNICEF Delegate. Joseph was also awarded a Delegate Rosette Ribbon to his service.

Alexa’s kind heart and caring spirit led her to help the family of a classmate after their home perished in a fire. She initiated her own crafts project, making and selling string bracelets to raise money for this family. Alexa also incorporated recycling in her volunteer work. She and her friends searched the local neighborhood and collected bottles to redeem to raise additional funds. With Alexa’s energy and compassion, she presented a $200 gift card to this family.

Joseph and Alexa are truly devoted to their community, as they both have made remarkable contributions with their volunteer service. Congratulating these inspiring students are (left to right): Assistant Principal, Paul Schmelter, guidance counselors Christine Preuss and Mark Schwartz, and Assistant Principal Frank Agovino.