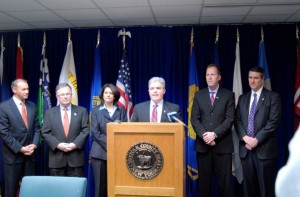 Suffolk County Executive Steve Bellone nominated Joanne Minieri to serve as his Deputy County Executive for Economic Development and Commissioner of Economic Development and Planning.  This is the first public sector position for Minieri who worked from 1995-2011 for Forest City Ratner, one of the largest developers in the New York metropolitan area, serving as President and Chief Operating Officer from 2007-2011.

“Joanne Minieri has private sector experience and understands how to build consensus with local communities to advance good projects and create jobs,” County Executive Bellone said.  “This sends a clear message that Suffolk County is open for business.”

“After meeting with County Executive Bellone and his staff, joining his team was an easy decision for me,” Minieri said.  “I am impressed by his commitment to economic development and excited to implement his vision to make Suffolk County a regional economic powerhouse.”

“This is a great signal to Long Island’s business community that County Executive Bellone is committed to improving our community’s business climate,” Long Island Association President and CEO Kevin Law said.  “It speaks volumes that such an accomplished job creating professional wanted to join his administration.”

“This is a home run for Suffolk County,” Deputy Presiding Officer Wayne Horsley, Chairman of the Legislature’s Economic Development and Energy Committee said.  “When we supported County Executive’s Bellone plan to empower economic development, this is exactly the kind of accomplished professional we all hoped we would attract.”

“I am extremely impressed by Joanne Minieri’s background and accomplishments and am pleased that County Executive Bellone sought after such a highly accomplished individual to lead Suffolk County’s economic development initiatives,” said Legislator Steve Stern, Vice Chair of the Legislature’s Economic Development and Energy Committee.

“I congratulate County Executive Bellone on his new economic development team. The County Executive’s appointments of Joanne Minieri and Vanessa Pugh bring both private and public sector expertise to the table. I look forward to working with them to partner on regional projects that will have a significant impact on Long Island’s economy,” said Mark Lesko, Brookhaven Supervisor and Chair of the Suffolk County Supervisors’ Association.

“Bringing someone with this skill set to lead Suffolk County’s Economic Development Department is a win for Suffolk’s business community and its residents,” said Dez Ryan, executive director of Association for a Better Long Island.  “Joanne Minieri has a rock-solid reputation for being knowledgeable about public-private partnerships and putting together economic development deals that are good projects and create jobs.”

“Vanessa and Joanne share my vision that towns are where zoning and planning decisions are made,” County Executive Bellone said.  “Instead of forcing planning onto communities, we are creating a regional resource to advance good ideas and create jobs.”

Working with the Legislature, County Executive Bellone created the Department of Economic Development and Planning without adding a single dime to the county’s payroll.  The new department will be responsible for a number of priorities including Innovate Suffolk, One Stop Shopping and Downtown Revitalization.  Pugh began work on March 26 and Minieri will begin on April 16 and will be voted for confirmation by the Suffolk County Legislature on April 24.

Deputy County Executive for Economic Development Joanne Minieri, CPA, previously served as President and Chief Operating Officer of Forest City Ratner Companies. In this capacity, she was responsible for implementing the company’s business plan, as well as overseeing all aspects of the company’s day to day operations, with an emphasis on the development and management of financial strategies, programs and procedures. Joanne’s areas of managerial responsibility encompassed cash management, accounting and finance, financial reporting, cost control, forecasting, policy development, and strategic opportunity assessment. In addition, Ms. Minieri directed the Executive Management team which devises the company’s long-term strategy and evaluates business development opportunities. Under her management, the company diversified its portfolio with the development of ten office buildings, twenty-four retail centers, two hotels, and two residential projects.

Ms. Minieri was involved in the company’s acquisition of the New Jersey NETS franchise. She represented ownership in overseeing the business side of the team and is responsible for managing the company’s investment. She also oversaw the pre-development of the Atlantic Yards project, an 8 million square-foot mixed-use development which will include a new state-of-the-art sports and entertainment venue, the Barclays Center, which is now under construction.

Ms. Minieri first joined Forest City Ratner Companies as Chief Financial Officer in 1995; she was promoted to Executive Vice President and Chief Operating Officer in 1998 and to her current position as President and Chief Operating Officer in 2007. Previously, she worked for Kenneth Leventhal & Company, where she monitored the development of a number of New York City real estate projects. Joanne’s experience in the real estate and financial services sectors spans a full range of professional accounting, tax and consulting services, which she has provided for both private & public companies.

Ms. Minieri is a member of numerous professional organizations, including the American Institute of Certified Public Accountants, the New York State Society of Certified Public Accountants, the Real Estate Board of New York, Urban Land Institute, Women’s Forum, Inc. and is on the Board of the Brooklyn Museum, the Brooklyn Children’s Museum and NEW (Non-Traditional Employment for Women). Ms. Minieri has received several awards for her accomplishments and leadership. She was honored in 2009 as one of Crain’s 50 Most Powerful Women in New York. In 2008, Ms. Minieri was the recipient of the National Italian American Foundation’s (NIAF) Special Achievement Award and was honored by the Special Olympics New York at its 9th Annual Real Estate & Construction Gala. She received an Alumni Achievement Award from Hofstra University as well as a citation from Nassau County Executive Thomas Suozzi after receiving the Women in Housing Development Award from the New York Housing Conference and National Housing Conference. Ms. Minieri has also been honored by the Nontraditional Employment for Women (NEW) organization.

A native of Brooklyn, New York, she holds a Bachelor of Business Administration degree from Hofstra University.