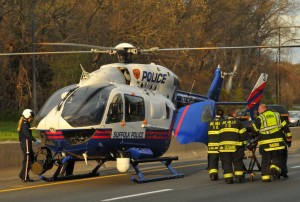 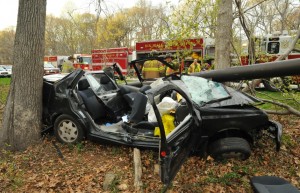 The Dix Hills Fire Department responded to a crash on the eastbound Northern State Parkway, west of the Deer Park Avenue exit at about 6 p.m. during the evening rush hour Wednesday, April 11. The driver of a Volkswagen sedan was trapped after the car left the roadway, knocking down a light pole and crashing into several trees.  Dix Hills firefighters used the “Jaws of Life” rescue tools to remove the car’s roof and a door to extricate the driver.  The patient was airlifted to Stony Brook University Medical Center by Suffolk Police Medivac helicopter.  About 40 Dix Hillls firefighters and rescue personnel were dispatched with three heavy rescue trucks, an engine, two ambulances, paramedic and fire police units, under the command of Chief Richard Granahan and Assistant Chiefs Tom Magno and Tom Napolitano.