May 18, 2012 3:33 pm | Filed under: Around Town,Code Enforcement,Investigations,News | Posted by: The Huntingtonian

The statement above from Supervisor Petrone is referring to a property on Columbia Street & Lowndes in Huntington Station.  Although the town board continues to boast that the Take Back the Blocks program is the answer to revitalization for Huntington Station, this was only the third property purchased in 6 years under the Take Back the Blocks program.

At the time of the October 2010 press release, the promise from Town hall was that the homes would be occupied by December 2011.  This is the state of the property as of May 2012:

Current State of the Proposed Housing

The property was purchased in 2010 from Don Pius, for  $778,000.  The entire project is being funded with public money from Suffolk County, Town funds and various grants. In addition to the $778,000, the tax payers were charged $100,000 for infrastructure improvements.  The proposed 8 homes with accessory apartments are going to be built with tax dollars.  We are not sure of the exact amount that the construction will cost. We are not even sure if the 16 units of housing will ever be built.  The money to build the housing is supposed to be coming from a $1.56 million grant from NY State.

Estimates for this project are:

There are currently at least 4 other houses for sale on Columbia Street alone.  Several months back there were at least 8 but they were taken off the market after more than 180 days with no potential buyers.  Recent transactions show that 8 houses sold from August to January 2012 and 30 houses remained on the market unsold. This includes the surrounding neighborhoods of  Lowndes, Tower, Academy, and other nearby blocks.  In a housing market that is very slow, in a neighborhood whose reputation has been tarnished by the closing of a school due to crime in the area, our Town Board is going to add 16 more units of housing stock to a neighborhood that is already saturated with homes for sale. 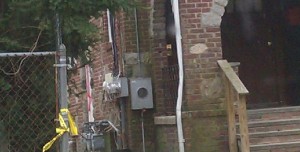 In addition to the homes for sale there are many other homes with blatant code violations which continue to be ignored on the” Take Back The Blocks” block of Columbia Street.  So, how was paying Don Pius well above market price for his houses, considered something to be proud of?   The average asking price of the homes that are currently for sale on Columbia street is around $187,000.  This is for houses that are in livable condition.   So what do you suppose Mr. Pius could have gotten for the sale of his homes at market rate considering they needed to be knocked down?  Our town Board paid him $776,000.

Now lets talk about a real Take Back the Blocks program.   For the money we gave Don Pius and the additional cost associated with the project, we estimate about 30 families could have been given a down payment of 20% for a home somewhere in the Jack Abrams School community.  If we look at the larger number of  $2,438,000, we could have helped about 70 families with 20% down payment assistance.  That alone would have changed the entire direction of the community.  If you think about the lost opportunity, it really is sad.

“Now that we have acquired the remaining parcels, we can begin the development of these 16 much needed affordable houses,” said Councilwoman Susan A. Berland.  “Most importantly, these units are going to be created for home-owners who will have a stake in their community. The ‘Take Back the Blocks’ program is such an important program for Huntington Station and goes a long way to provide an opportunity for community rehabilitation.” (April, 2010)

Interesting that Ms. Berland and Mr. Petrone in their statements above make the point that individuals who are home owners have pride and a stake in the community.  This didn’t seem to be taken into consideration when they invited Avalon Bay to build mostly rentals in this same community.