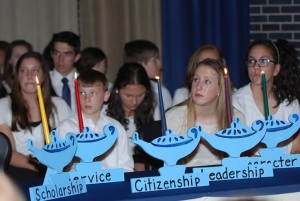 In the Huntington School district, the J. Taylor Finley Middle School National Junior Honor Society chapter inducted 91 current seventh graders into its ranks during a Monday evening ceremony. The ceremony included many traditional elements, including a candle lighting segment and a member pledge.

Faculty advisors Amy Hughes and Phyllis Sadusky beamed during much of the evening. This year’s honor society officers and several distinguished members assisted during the ceremony. The incoming members seemed genuinely excited to be joining the exceptional group of scholars and their parents appeared proud, snapping photos and applauding at every opportunity.

Finley Principal John Amato gave an inspirational address, which was followed by the time-honored candle lighting ceremony and tapping conducted by the officers. The new inductees received certificates and pins commemorating their achievement. 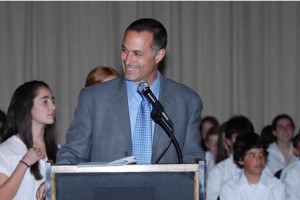 Mr. Amato called it a “wonderful evening” for the students and their families. “These students earned this honor by working very hard throughout elementary school and as seventh graders. Next year they will complete their community service, leadership and citizenship requirements as eighth graders.”

The evening wrapped-up in the school lobby with snacks and refreshments, which were provided by the Finley PTA. Finley parents and students chatted with Ms. Hughes and Ms. Sandusky and Mr. Amato and Assistant Principal Kenneth Parham.