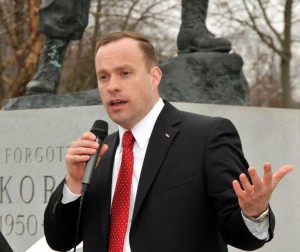 In a recent campaign mailer, Congressman Steve Israel published the results of his Priorities Survey. When asked for a comment, Stephen Labate said, “It is time for Steve Israel to start telling the truth about his record and what he supports. His comments are complete mischaracterizations of the truth, especially regarding Medicare and Social Security”.

Labate, the Republican, who this November will challenge Israel, a six-term incumbent, pointed out the reality of his record is the total opposite of what he describes. Labate said, “It is patently false for him to say he supports seniors and Medicare because it was he who voted to cut close to $600 billion from Medicare in order to fund Obamacare. This cut makes it that much more difficult to keep the program solvent and has added to the number of Doctors that refuse to accept it”.

“Congressman Israel also points out in the mailer that poll results found that Americans want less jobs shipped overseas and more jobs in the United States. I find this extraordinary because after 12 years in the House of Representatives did he really need a poll to tell him that? Long Island has been bleeding jobs for years, and yet taxes continue to go up. Aside from the 181 jobs created from the Obama Stimulus and a 1.3% success rate in getting his initiated bills passed, I must ask, what has Steve Israel actually done after 12 years in Congress?”

To create sustainable jobs here on Long Island, we need to lower taxes and get government out of the way of our small business owners who actually create the good paying jobs Long Islanders need and deserve.

The Congressman’s alleged interest in ending our dependence on foreign oil is also questionable, what in 12 years has he done to reach that lofty goal? He has never supported exploitation of America’s own energy resources and voted against the Keystone oil pipeline which would have created 20,000 new jobs and supplied 500,000 barrels of oil from our long time ally, Canada. Furthermore, as the co-chair and founder of the Sustainable Energy and Environment Caucus in Congress, Steve Israel appropriated billions in taxpayer money to the likes of Solyndra and Beacon Energy. In Washington, you are what you support; Solyndra and Beacon Energy were colossal failures.

“To conclude, voters are tired of politicians who exaggerate and hide from their record”, said Labate. “Long Island needs a representative who will tell them the truth, and not hide behind 30 second sound bites when they feel the truth will hurt their own political aspirations.”

One Response to Message From Candidate Labate