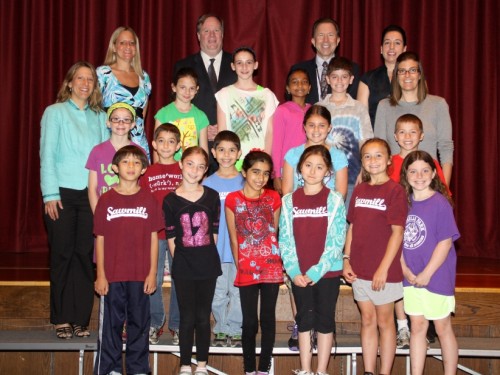 Commack’s Mandracchia-Sawmill fourth grade National Science League students have done it again! For the fourth time since 2005, the team has earned first place in the national competition.

This was a stellar year for the National Science League teams at Mandracchia Sawmill Intermediate School. Both the third grade and fifth grade teams ranked second nationally, only fractional points away from first place. All teams performed with the highest merit and led the league competition at their respective grade levels.

National Science League students meet weekly to prepare for the competition. Students must try out for the team by taking the written test from the previous year’s meet. To prepare for the national competition, the students conduct science experiments for an eight-week period during the time they would normally be at after-lunch recreation. They learn about scientific terminology, chemical reactions and compounds, and engage in other types of exploratory learning. The timed contest consists of 35 multiple-choice questions, based on factual knowledge as well as the students’ understanding of scientific processes.

“Providing opportunities for scientific investigation and discovery beginning with our youngest students promotes a love of science,” said Commack Superintendent, Dr. Donald A. James. “It is one of the factors that leads to our science achievements at the international level, such as this month’s Intel recognition for four of our high school students.”