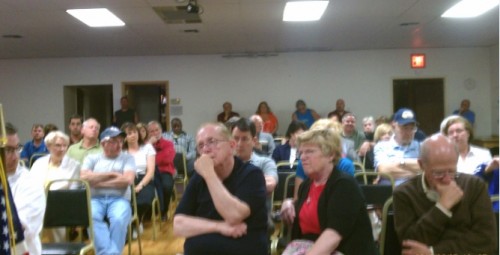 Last night’s meeting at the VFW on Pulaski Road hosted by the Greater Huntington Civic Group proved that Huntington’s land use policies are in complete shambles.

Sustainable Long Island (SLI), hired by Gannett Flemming, an “international planning, design and construction management firm” who was hired by the town of Huntington to help with the Brownfield Opportunity Areas (BOA’s), was the featured guest at this meeting.
Amy Engel, Executive Director of SLI, was unable to get through her opening presentation without being pelted with questions from local residents, most of which seemed to come from a complete lack of trust that residents have for town officials and groups sent by the town to sell the latest incarnation of “the plan.”  Residents wanted to know exactly what the town was planning and how it was going to address Huntington Station’s current problems (like gangs, illegal housing, poor code enforcement, etc.) before any re-zoning was to begin.
It soon degenerated into a farce when Ms. Engle began taking requests from the crowd as to what they wanted to do with the BOA’s.  Was this a way to placate a seemingly hostile crowd?  I doubt it.  It was a shrewd and clever way to trick the crowd into thinking they were part of the process.  In fact, if you go to SLI’s website it clearly spells out this is exactly how they operate.  Similarly, this happened when the town’s Comprehensive Plan was being developed. Certain focus groups were ignored while the ‘invitation only’ group had their opinions published.  Regardless, this is no way to run a meeting and definitely no way to create coherent land use policies in the town of Huntington.
At one point I questioned the legitimacy of SLI and why anyone would recognize them as being an ‘authority’ on land use in Huntington.  Since I wanted the audience to know just who they were dealing with, I asked Ms. Engel what she meant by ‘food justice’, as it was stated on the company’s website.  In response, she claimed that certain neighborhoods didn’t have access to fresh food in their immediate area and some people had to drive 3 miles to the nearest grocery store. I thought to myself, “the next thing you know she’ll be calling the United Nations Human Rights Division.”  Now that I think about it, some people in Dix Hills are in the same situation, but nobody is running over there to open a vegetable stand on the corner.  Regardless, she said that access to fresh food was a ‘right’ that her organization was committed to pursuing.
I couldn’t believe what I was hearing.  Nowhere in the U.S. Constitution is there a ‘right’ to fresh food.  When I mentioned this, she became flustered and felt I was getting personal and threatened to leave.  Apparently, I hit a nerve.  I ended my little dalliance with my new left wing friend by asking her if she agreed with the phrase, “From each according to his abilities, to each according to his need.”  She wouldn’t tell me if she disagreed with this Marxist philosophy.
In summary, it has been proven again and again that economic growth and ‘sustainability’ do not come from the top down.  It comes from the bottom up.  It starts on the ‘micro’ level with the actions of individuals in an unhampered marketplace (no crony capitalism), not at the ‘macro’ level with public works projects and master planning by C+ students in the government.
Likewise, land use should be governed by voluntary transactions, with entrepreneurs and risk takers pursuing profits and at the same time bearing all the consequences of their actions while playing within the existing rules.  Not from heavy handed government intervention trying to design the perfect neighborhood. In Huntington we already have rules in place, some good and some bad.  We don’t need any more 5 year government plans designed by urban specialists.  They don’t work.  Never did, never will.  People are not inanimate objects or sheep and we can’t be predicted or herded off to the nearest collective without resisting.
At the end of the day, when land use rules are bent by cunning developers and career politicians who use shills like SLI to soften the opposition, the only ones bearing the consequences are the taxpayers and the residents.
By Peter Nichols
Facebook Comments must be signed into Facebook