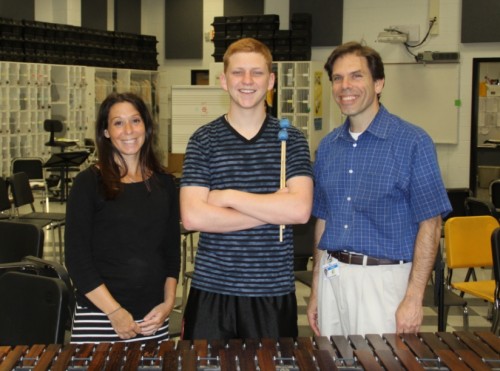 Commack High School senior Daniel Gillen’s rhythmic abilities and outstanding performance in instrumental music have been recognized nationally. Dan received the John Philip Sousa Band Award for “superior musicianship, leadership, dependability and loyalty.” The Sousa award is the most prestigious award a high school band student can receive. He also was selected as an Atlantic Wind Symphony Band recipient, and was chosen to rehearse and perform with the Symphony on June 3 in Patchogue. Locally, Dan was also awarded the Commack High School Encore Scholarship.

Dan has played with the high school’s Pit Orchestra during all four years of high school, with the ICA Wind Ensemble for three years, with the exclusive ICA Jazz Band for the last two years, and with the ICA Stage Band during his freshman and sophomore years.

Planning a career as a music educator, Dan will attend SUNY Fredonia in the fall. He attributes his success to his teachers. “Mrs. Franzke was a very big inspiration of mine. When I came in as a freshman I didn’t exactly know how to read music, but Mrs. Franzke inspired me to be the best musician I could be, and with her encouragement, I became the musician I am today. I began to take music very seriously during my sophomore year of high school. My private teacher, Jude St. George also has been a tremendous inspiration for me. I worked hard practicing every day and participating in as many musical groups as possible. I hope to some day become a music teacher, and inspire my students as I have been inspired.”