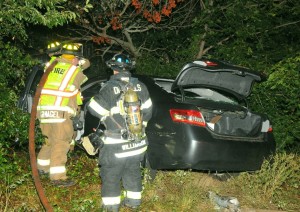 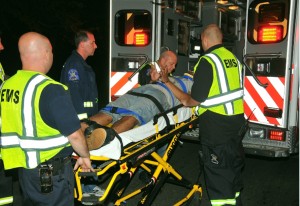 The Dix Hills Fire Department responded to a crash on Carlls Straight Path and the South Service Road of the Long Island Expressway, on Friday the 13th, at about 8:40 p.m. The driver of a Toyota Camry knocked down a utility pole and crashed into the woods where the car burst into flames. Dix Hills volunteer firefighters quickly extinguished the fire. The driver was taken into custody by Suffolk Police, and transported to Huntington Hospital for treatment of non-life-threatening injuries by the Dix Hills Rescue Squad. About 25 firefighters and rescue personnel were on the scene with two heavy rescue trucks, an engine, ambulance and paramedic responder, under the command of Chief Richard Granahan.