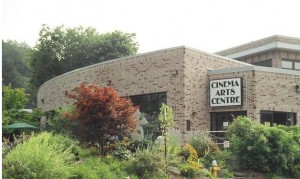 The Cinema Arts Centre is pleased to announce that The Academy of Motion Picture Arts and Sciences has partially funded “Enormous Changes in our Everyday Lives,”  a new documentary film series, with a $2,500 grant through its Institutional Grants Program, 2012-2013.  “Enormous Changes in our Everyday Lives” will feature six documentaries by women and people of color (American and international) that deal with the enormous changes arising from the exposure of events and people that impact our lives and the revelatory role of filmmakers.

The first film in our “Enormous Changes in our Everyday Lives” series will be Kumaré, with filmmaker Vikram Gandhi live via Skype on Wednesday, August 29 at 7:30pm.

Kumaré is the true story of a false prophet. In this alternately hilarious and moving documentary, Indian-American Filmmaker Vikram Gandhi explores the issue of faith, and our willingness to follow “spiritual leaders,” by impersonating a wise Indian guru and building a following in Arizona. http://www.cinemaartscentre.org/event/kumare/

The Cinema Arts Centre expresses its gratitude to The Academy of Motion Picture Arts and Sciences for its generous support.

More about the movie

“Faith begins as an experiment and ends as an experience.” – William Ralph Inge
In order to understand the meaning of faith, and the means by which the desire for faith can be manipulated, Indian-American filmmaker Vikram Gandhi became a faux guru named Kumaré.  Growing long hair and a full beard, wearing an Indian robe and leaning on a staff, Kumaré/Gandhi journeyed to Phoenix, Arizona to recruit disciples. At first, Kumaré seems like a Sacha Baron Cohen knock-off, and the film is filled with humor, but soon the plot and ideas deepen.  Kumaré connects with the men and women he meets and deceives.  He teaches his acolytes that every person has what she/he searches for within themselves.  He warns them that he is a fake, which they perceive as spiritual modesty but the viewer realizes is both a literal and philosophical truth.  Or is it fake?  Gandhi realizes that the teachings of Kumaré reveal his ideal self.  But now that he has made true connections with several people who share secrets about themselves, he faces the dilemma of revealing his hip American filmmaker self to men and women who trusted him. Part comedy, part drama, part philosophy, Kumaré is a thought-provoking film. Kumaré‘s teachings will become a part of our contemplation of our own lives and beliefs.

“Incredibly moving. Prepare to have your assumptions pitched out the window by this tense, surprisingly probing satirical documentary…” -Mark Holcomb, VILLAGE VOICE

This program is made possible in part by The Academy of Motion Picture Arts and Sciences.

Since 1973, presenting the best U.S., International, Independent & Repertory films on 3 screens 365 days of the year, in a comfortable ambience including the sculpture garden & The Sky Room Café, the Cinema Arts Centre is located at 423 Park Ave (just south of 25a), Huntington, NY 11743 (25 miles east of New York City). Admission for regular programs: $11.00. Discounts for members, seniors, students & children. CAC is a not-for-profit 501(c)3 organization. For further information call 631-423-7610. To sign up for weekly email schedule: info@CinemaArtsCentre.org Membership and Schedule: www.cinemaartscentre.org/

The mission of the Cinema Arts Centre is to bring the best in cinematic artistry to Long Island, and use the power of film to expand the awareness and consciousness of our community.