Asharoken Board of Trustees Monthly Meeting Held on 9/4/2012 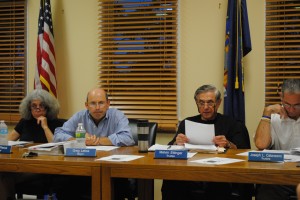 The Village of Asharoken Board of Trustees met on September 4, 2012 at Asharoken Village Hall. At the meeting Deputy Mayor Joe Tilleli resigned, effective 9/4/2012. His reason, according to his letter of resignation, is due to his increased business responsibilities that precludes him from having the appropriate time in dealing with the business of Asharoken Village. In his place, Mayor Greg Letica has appointed Ms. Mary “Pam” Pierce as the new Deputy Mayor. Ms. Pierce was previously the Village Trustee. Mayor Letica then appointed a Ms. Burke who is also the sister in law of the Village Clerk Nancy Rittenhouse, to fill Mr. Tilleli position as Village Trustee. Ms. Burke will have to recuse herself on issues of personnel matters concerning Ms. Rittenhouse.

Additionally, it was announced that Sand Piper Farms tax status was voted on by the Suffolk County Legislature and said farm is now considered agricultural land. So the property will now be assessed as agricultural land which means the property tax on that parcel of land can be re-figured and lowered. The new classification for that land will generate less tax dollars to the village. Mayor Letica stated the worse case scenario is that the re-assessment could cost all taxpayers $500 per property to cover the loss in revenue from Sand Piper Farms. To date, the Mayor states that he is trying to work out a Payment in Lieu of Taxes (PILOT) program with the landowner. Additionally the Mayor warned the residents that a big tax hike in the next budget cycle is possible. In addition to the farm re-assessment concern, increases in police retirement contributions and police unused sick leave issues could also contribute to a village tax increase.

The Mayor has also asked all residents of the village to email Congressman Israel about the rumor of the possible closing of the Northport Post Office. This would make the closest post office East Northport on Larkfield Road, quite a way from the Village.

The Village is having a blood drive on Monday September 24th, 2012 between 2pm – 8pm at Village Hall. Any questions regarding the drive should be directed to Nancy Rittenhouse at 631-261-7098

During the month of July, Nicholas Wieland, editor of “theHuntingtonian” newspaper was stopped by the Asharoken Police Department from delivering it’s monthly newspaper to the residents of the Village. At the September 4th meeting, Mr. Wieland submitted to the Village Clerk, on the public record, a letter to the Mayor requesting a clarification as to why our 1st amendment right to freedom of the press is being suppressed by the village. Mr. Wieland asked the Mayor to read the letter aloud on the public record but instead he chose to read it silently. The Mayor asked Mr. Wieland if he could go over this issue with the new village attorney’s. Several residents at the meeting requested further information on this concern.

Additionally the Asharoken Highway Superintendent provided a report on a drainage problem (ponding of water) at Bevin Road. The issue relates to four catch basins in the vicinity of the flooding. Apparently the 1st basin does not catch any storm water and said water then flows to the other basins. There is also concern about leaf debris clogging some of the structures thus further exacerbating flooding and also creating a maintenance problem as one of the structures in particular has poor access for said maintenance purposes. Interaction between the Superintendent and Asharoken Trustee Joseph Catanzano seemed to get a bit testy at times, while discussing the various reasons for the ponding of water. Apparently the consultant, Nelson and Pope prepared a design to mitigate the flooding. The design called for two phases of work. Both phases are associated with the installation of catch basins at two separate areas on the affected Roadway. To date, only phase one was completed. The reasoning for not implementing phase II are due to financial constraints in the Village.

During public session resident Anna Pollaci asked questions regarding previous minutes and the corrections to them. She was also was concerned about why “theHuntingtonian” newspaper could not be delivered in the village.