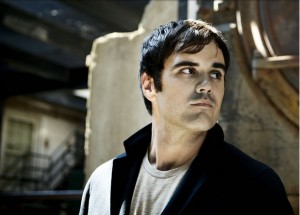 Reed Waddle, a New York-based singer-songwriter and the grand prize winner of the 2012 Telluride Troubadour Contest, will be the featured performer when the Folk Music Society of Huntington’s monthly Hard Luck Café series resumes at the Cinema Arts Centre on Thursday night, Sept. 20, following a summer hiatus. The 8:30 p.m. concert will be preceded by an open mic at 7:30 p.m. Tickets are $8 for Cinema Arts Centre and Folk Music Society of Huntington members; $12 for non-members. The Cinema Arts Centre is at 423 Park Avenue in Huntington. For more information, visit www.fmsh.org or call (631) 425-2925.

Waddle is a modern-day troubadour — a young man who has, in his own words, traveled the country “like a gypsy trucker traveling wherever my music takes me, writing about what moves me — the people and places I encounter.” Indeed, this smooth-voiced singer has logged quite a few miles since August 2009, when he relocated from his home town on Florida’s Gulf Coast to the Boston area in search of a fresh start and a musical breakthrough. Within months, Reed Waddle had been named grand prize-winner in the New York Songwriters Circle competition and also was a winner in The Mountain Stage New Song Competition in West Virginia. This period of personal and musical growth eventually prompted Waddle’s move to New York City. His most recent release, Creatures of the Heart, is a potent blend of Reed’s soaring melodies and the raw energy of his handpicked studio band.

Along the way, Reed Waddle has shared writing credits with one of his mentors, John Oates, also sharing the stage with him on many occasions. He performed in 38 states during 2010, touring both with Caleb Hawley and as a solo artist. Waddle’s song “I Saw Stars” took him to the finals of the 2007 American Idol songwriters’ competition — one of only 20 chosen from among more than 25,000 entries. “Waddle’s strength is his diversification and range — there’s no putting him into a ‘category’ because he changes sounds from song to song [and] the result is pure butter,” according to JustAnotherSong.com.

Established in 1973, the Cinema Arts Centre in Huntington (www.cinemaartscentre.org)seeks to bring the best of cinematic artistry to Long Island and use the power of film to expand the awareness and consciousness of our community. Long Island’s only not-for-profit, viewer-supported, independent cinema presents a wide array of films that are often accompanied by discussions and guest speakers.

Now in its 44th year, the Folk Music Society of Huntington (www.fmsh.org)presents two monthly concert series, a monthly folk jam and sing-along, and an annual folk festival in conjunction with the Huntington Arts Council. Upcoming First Saturday Concerts at the Congregational Church of Huntington in Centerport include Toby Walker (Oct. 6), Amy Speace and Joe Crookston ((Nov. 3) and a Harry Chapin Tribute (Dec. 1). The next Hard Luck Café on Thursday, Oct. 18, will feature The Tres Amigos. Folk Jams at the South Huntington Public Library are scheduled for Sundays, Oct. 14, Nov. 18 and Dec. 9.

Stoey and photo by Michael Kornfeld