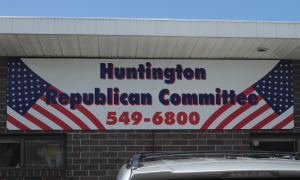 The sign on the door said “we are deeply saddened by the loss of our friend and supporter Jim Conte.  We will reopen on Monday, October 22”.   Republican headquarters was closed in honor of  and to allow volunteers and staff to attend the funeral services for 10th District State Assemblyman James Conte.  After attending the services, volunteers and staff  returned to Republican Headquarters to find crude signs taped to the building.

Republican Party Chairperson  Toni Tepe stated “this was very upsetting especially on a day when we buried a special man, Jim Conte who gave so much service to this town, state and the Republican Party.  After a very sad day, we now have to deal with this.”

Ms. Tepe explained that this is the 4th incident since early summer.  A police report was filed in the case.  It is possible that the vandalism was caught on nearby surveillance cameras.

Republican headquarters is located on the corner of Park Avenue and Broadway in Huntington Station. The building is used for candidate screening,  to distribute election materials, and other efforts to support Republican candidates. 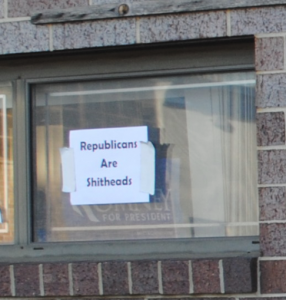 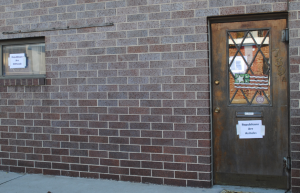