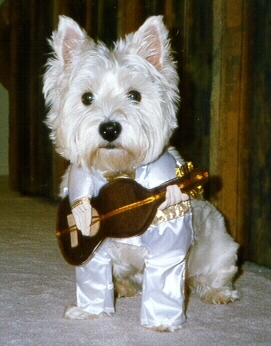 Cold Spring Harbor is going to the dogs. Once again the picturesque Village of Cold Spring Harbor is the place to be on Saturday, October 27th (rain date: October 28th) at 12 noon for the “6th Annual Howl-ween: Corky’s Canine Costume Parade Celebration and Paws for a Cause Event.” This spectacular star-studded celebration, produced by Nightingale PR, features an exciting street sale, a luxury, classic car show in the park, live music and the most elaborate parade of canines in costumes. The event honors the memory of Corky Nightingale, the adorable Westy who served as Parade Grand Marshal and mascot for years and was the inspiration for this very special celebration.

Canines from all over the tri-state area are planning to participate in the chic canine costume parade considered a “Paws for A Cause” celebration. The parade will begin at 12 noon at the corner of Spring St and Main St (25A). Spectators will line the street and for a few minutes, Main Street will be transformed to a “cat walk” where canines will model their finest costumes as they march to the tune: “Who Let the Dogs Out.” “I’m looking forward to attending my second Howl-ween parade with all of the other dogs and maybe having a biscuit or two,” said Sookie Schneider, a two-year-old pug.

The Parade will end at Cold Spring Harbor Park where the canine celebrities will be warmly greeted by “pupparazzi” and have a chance to enjoy live music, a luxury classic car show and fun activities throughout the town during the afternoon. Rumors have it that some of the canines will be showing off some “hot” luxury, classic and vintage cars in the park and canines will have a chance to “Bark the Vote” as they pick their choice for President between Bark Obama and Mutt Romney. In addition, Cold Spring Harbor Village will be declared “Corky’s Canine Friendly Town” for the day and canines and their owners will be welcomed with open paws to browse the shops and experience the beauty of this charming village. Other exciting highlights include a raffle by the Huntington Buzz, Long Island’s First Broadband News Network who has become Google’s #1 Search destination for “Panaerobics,” a form of exercise and resistance training. To celebrate their growth in Huntington, and in the spirit of Health & Well Being, the Buzz will be raffling off a Pro Form Eliptical ($790 value) at the event.

“Howl-Ween: Corky’s Canine Costume Parade” has received recognition throughout the world for its creativity. The Summit International  Awards has honored Nightingale PR for the event with a 1st place Gold Recognition for Best Community Relations  Program/PR in the prestigious Summit International Creative Awards. “Our goal is to help the local community and have fun by creating a program which would make a difference, support local business and increase the town’s visibility,” explained Alyssa Nightingale, creator of Howl-ween.

Parade entry fee is $15 before October 26th and $20 the day of the event with a percentage of proceeds to be donated to support “rescue dogs and dogs that rescue.” For information, call (631) 367-2565 or online www.howl-ween.com

Photo above: Howl-ween: Corky’s Canine Costume Parade honors the memory of Corky Nightingale, the adorable Westie who served as Parade Grand Marshal and was the inspiration for this very special annual celebration.