Be it blizzard, hurricane or super storm the old adage remains true; the show must go on! Despite a limited rehearsal schedule with little time to build a set, the Huntington High School drama club and stage crew will put their best effort on the stage this Saturday, Nov. 17 at 7:30 p.m. and Sunday, Nov. 18 at 2 p.m. for a production of Oscar Wilde’s Lady Windermere’s Fan. 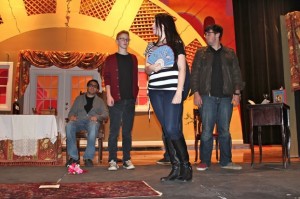 Consecutive storms forced school to be closed and rehearsals to be cancelled for nearly two weeks. Once the doors opened again on Nov. 9, the drama club and stage crew went into overdrive, including a nine-hour day last Saturday. Despite some cast members still lacking power last weekend, they proved the show really will go on.

This weekend’s audiences will be treated to one of Wilde’s best works. Huntington drama club advisor Michael Schwendemann is excited about the show and displayed his enthusiasm when asked to describe the plot line.

“Lady Windermere has a happy marriage, or at least, that’s what she believes until one of London’s society gossips, the Duchess of Berwick arrives with her daughter, the Lady Agatha, to voice her suspicions about an affair Lord Windermere appears to be having,” Mr. Schwendemann said. “It’s not just the Duchess that has evidence, however, Windermere’s private bank book shows that he has been giving large sums of money to a ‘Mrs. Erlynne’ on frequent occasions, and he himself even admits to seeing much of the woman. To add insult to injury, Windermere insists that Mrs. Erlynne is invited to the ball that is being held for Lady Windermere’s birthday.” 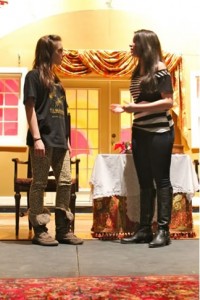 Employing the witty dialogue and social satire for which he is still remembered, Wilde’s play shows audiences the destructiveness of gossip and superficial judgment, examines the ambiguous sexual morality and gender politics at the heart of British society, while challenging the typical perception of what constitutes a ‘good woman.’

Tickets will be on sale at the door for $10. Seniors, staff members and students with an ID card will be admitted for $5. Refreshments will be sold during intermission. The Huntington High School auditorium is handicapped accessible. There is plenty of convenient parking available. Call 673-2016 for more information.

For a peek into England in 1892, a time long gone by, join the cast and crew at Huntington High School this weekend.