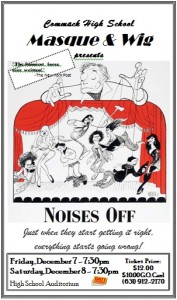 All tickets previously purchased will be honored.

The play revolves around an ambitious director and his troop of mediocre actors, as they prepare for the opening night of their production. Just when they start getting it right, everything goes wrong! This play has been called the funniest farce ever written, and it lives up to its reputation as a relentlessly side-splitting comedy of errors.