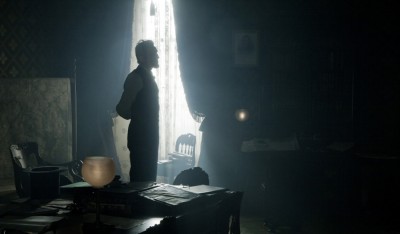 Steven Spielberg’s Lincoln is a compelling, entertaining biopic about one of America’s greatest presidents, which makes us completely forget our preconceived notions about him as an icon. It was no more than fifteen minutes in before all of the famous images of honest Abe had vanished from my mind, and I felt like I was watching not an American icon, but simply a man. The first time we see him in the White House, he has his coat removed and his shirt slightly unbuttoned with his feet up, relaxed. The film’s greatest achievement is this ability to make its characters, despite their unforgettable place in history, feel like they could exist today.

Had it been directed by a more conventional filmmaker, Lincoln would open with the president’s inauguration, or perhaps his election, and attempt to encompass the entire administration, complete with all of its ups and downs, showing us all of the moving parts. Spielberg’s film, wisely, is far more focused. This isn’t about the man’s entire life, or even his entire presidency. Instead, Lincoln focuses on the last four months of his life, from January to April of 1865, when the president attempted to pass the now historic 13th amendment, abolishing slavery. Though we only see a small part of the man’s presidency, by the end of the film, we understand him just as well as if we had seen it all.

In one of the opening scenes, Lincoln makes the decision to put the 13th amendment up for a vote by the end of the month, and for the remainder of the film, we follow the process of attempting to get it passed, at times with some questionable political tactics. Essentially, this is what most of the film is about: the process of getting an amendment through the House of Representatives. Yet surprisingly, this is one of the most entertaining movies I have seen all year. A film like this had potential to feel like a history lesson, with actors standing around in rooms lecturing to us about how government works, but instead Spielberg, along with screenwriter Tony Kushner, manages to construct a film which feels wildly entertaining, and often surprisingly funny, while not reducing the importance of what we’re seeing.

The best thing that can be said about Daniel Day Lewis’ portrayal of Lincoln is that, after the opening scene, I never once thought about it. Despite being familiar with this actor from other memorable roles, like Daniel Plainview in There Will Be Blood, I never felt that I was watching Lewis, a recognizable actor, doing a Lincoln impression. Historians seem to suggest that this performance is accurate, but more importantly than that, as we’re watching the film, that’s something that never crosses our mind. Recognizable actors are constantly popping up throughout the film in supporting roles, but the two highlights are Tommy Lee Jones as Thaddeus Stevens, one of his best performances in years, and James Spader as W.N. Bilbo, a lobbyist who gets some of the film’s most memorable, and funniest, lines.

For a film which is nearly 100% dialogue driven, the pacing of Lincoln is truly impressive. It takes great talent to write a scene with nothing more than a few characters speaking to each other, yet make it feel important and compelling, and Spielberg and Kushner have done so here. Rarely is there a moment which doesn’t contribute to the film’s overall theme of the sacrifices made to get things done in government, and the toll that takes on the characters but also the tremendous reward in the end.

At times Spielberg is criticized for being overly sentimental, especially in last year’s War Horse, but he has struck a perfect balance with Lincoln. The sentimentality feels appropriate considered the historical importance of what we’re seeing, yet it’s surprisingly retrained for Spielberg. He has enough sense to appreciate the drama of the situation while still having some fun with it, like during several classic scenes involving drama unfolding on the house floor.

It wouldn’t be a Spielberg film without a sweeping John Williams score, but unfortunately the composer’s brilliant music barely appears at all. Too many scenes are completely silent except for the dialogue, and the film’s main theme, as brilliant as it is when heard on its own, doesn’t actually play until the end credits. A greater musical presence in some places could have helped to elicit even more of an emotional reaction than the dialogue can on its own. The film’s ending also came across as a bit rushed to me. A certain famous, historical event does indeed appear, but it seems like an afterthought, tacked on to the ending at the last second. The movie would have had a much stronger ending, I think, had Spielberg chopped off the last few minutes all together.

Lincoln isn’t just a movie you’d watch in history class; it’s the kind of movie you’d watch on your own for personal entertainment, too. It’s about the trials and tribulations of getting things done in government, while paying tribute to the tremendous benefits of a system like this and the feeling of accomplishment in passing a historic piece of legislation after so much hard work. But most of all, Lincoln takes us into a somewhat unfamiliar period of history and makes it feel immediate, important, and real, showing us the human side of the icons. Not since The West Wing has politics been this entertaining.