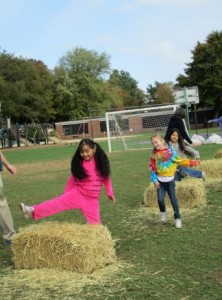 Southdown Primary School in the Huntington School district has an annual harvest festival that is a throwback to a bygone era and the community’s agricultural traditions, especially the land that surrounds the building.

Once part of the Gold Coast estate of pharmaceutical titan George McKesson Brown, Southdown’s grounds came to life as hundreds of students in grades K-3 participated in a series of fun educational experiences.

One day earlier, kindergarteners “grew” pumpkins for themselves and their fellow students after sprinkling “magic” seeds in a grassy patch that within hours produced 450 colorful pumpkins ready for picking by the next morning.

From that magic pumpkin patch, interactive storytelling and scarecrow-stuffing relay races to songs and a hayride, pumpkin picking and decorating, there was plenty to learn and plenty of fun to be had at the harvest festival.

“It was a wonderful day that led to many excellent pieces of literature, including stories, poems and responses and surely will provide many years of happy memories of the harvest for our students,” Southdown Principal Michelle Marino said. 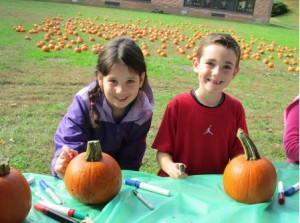 Students took turns rotating through learning centers that included a hayride with teacher aide George Murphy and music teacher Pamela Jacovina. The youngsters sang songs along the way as Mr. Murphy played guitar while the large buildings and grounds department truck made its way around Southdown’s scenic grounds.

During the relay, students stuffed scarecrows with newspaper to fill out their bodies and then jumped bales of hay as they raced back to their lines. The youngsters even named their respective scarecrow and took group photos with the creatures. 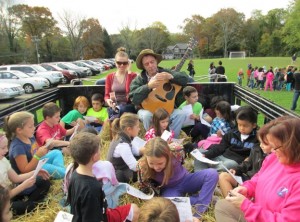 station. Students listened attentively and then acted out harvest-themed stories, “each one with a valuable lesson about the power of working as a team,” Mrs. Marino said.

The final stop of the day was the always popular pumpkin picking and decorating station. A day before the festival, kindergarten students filed outside to plant some “magic” seeds, utter a set of carefully selected words, sing a special song and read a poem. They finished with the “pumpkin seed stomp” to “activate” the magic, Mrs. Marino said.

During the festival, students carefully inspected the pumpkins before selecting what they considered to be the perfect one. Then they went about decorating it with creative artwork using colorful markers and took it home to show their family members.

Mrs. Marino said the harvest festival is deeply rooted tradition that is here to stay.