Presentation: “The Wreck of the Gwendoline Steers” 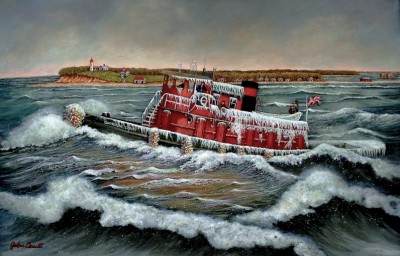 The Northport-East Northport Public Library will be presenting “The Wreck of the Gwendoline Steers:  A forensic Analysis” hosted by local author and maritime enthusiast Edward A.T. Carr on Wednesday, December 5th at 7pm.  The presentation will take place at the Northport Branch auditorium.  There is no charge to attend.

Fifty years ago this month, the tugboat Gwendoline Steers, pride of the Steers Sand & Gravel Company, sank in Huntington Bay during an ice storm. The following morning, the tug’s lifeboat was found at Hobart Beach on Eaton’s Neck with the body of a crew member encased in ice. The rest of the nine member crew came ashore over the next 5 months… one at the south side of Eaton’s Neck, one at Crescent Beach in Centerport, another at Huntington Beach.  LIFE Magazine and local newspapers kept the tragedy fresh in everyone’s minds until the wreck was found and all bodies recovered the following Spring.

“There were numerous issues that surrounded the sinking,” according to Carr.  “The weather played a major part, but numerous details both before and after the tragedy created more questions and fueled speculation pitting the Coast Guard, Army Corp, victim’s families, and Steers Sand & Gravel against one another.  The presentation will cover every aspect of the sinking and aftermath, and let the audience decide for themselves.”

At the conclusion of the event, the audience will be able to view display boards, and artifacts recovered from the wreck by local divers.  Attendees will also be treated to view prints of local artist Jo-Anne Corretti’s newest painting entitled “Last Moments” commissioned to commemorate the 50th Anniversary of the sinking.

“The tug was home-based out of Northport, and the crew members were all known in the community.  They were a part of Northport’s fabric as they patronized local shops on Main Street, and partook in daily business activities in the area.  Steers Sand & Gravel was a family company, and the sinking made national headlines,”according to Carr.

The Gwendoline also represents one of the few instances where the Coast Guard could not rescue stranded sailors right on their doorstep.  The storm was too intense, and the Eaton’s Neck station couldn’t respond.  “The storm was on par with what we just experienced with Tropical Storm Sandy,” stated Carr.  “The winds were sustained at 75 mph with gusts of 90 mph.  The only difference is that the temperature was 3 degrees Fahrenheit, while Sandy had 60 degree temperatures.”