The Heckscher Museum of Art Upcoming Programs and Exhibitions

December 8, 2012 2:59 am | Filed under: Around Town,Arts & Entertainment,Huntington,News | Posted by: The Huntingtonian Staff

As part of the Senior Days program, on the second Wednesday of the month, seniors (62+) are invited to visit The Heckscher Museum after 1:30 pm admission free.  Following the scheduled program, seniors can enjoy the exhibitions. Call 631.351.3250 for program details. Groups and individuals are welcome.

Second Senior Wednesday is part of the Senior Days on Long Island program designed to provide seniors with interesting and unique opportunities at reduced or no cost.  For a schedule of Senior Days activities, visit http://seniordays.weebly.com.
Free Museum Admission for Seniors

How Real is Real?

Highlighting several works from the Museum’s Mirrored Images exhibition, Bobbi Coller will discuss the recurring attraction to realism in the history of art and explore the difference between “realism” and “reality.”

Back to the Future:  Reconsidering American Art at the Armory Show

For families with children ages 4 – 8 years

Join museum educator Tami Wood for a family-friendly tour of the Museum’s Mirrored Images:  Realism in the 19th and 20th Centuries exhibition. Families will experience the exhibition through close looking, lively conversations, and hands-on gallery projects.

Space is limited. Registration is recommended.

EXHIBITIONS AT THE HECKSCHER MUSEUM OF ART

Mirrored Images: Realism in the 19th and 20th Centuries

In 1913, the American public was introduced to avant-garde European art styles at the International Exhibition of Modern Art, held at the Lexington Avenue Armory and known

Across Time & Place: Treasures from the Permanent Collection 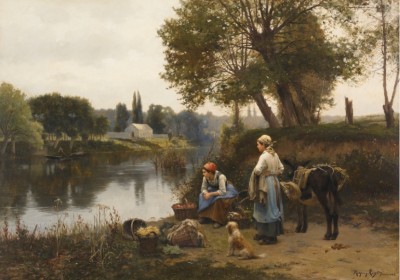 This rotating exhibition of highlights from the Permanent Collection features a broad range of works by American and European artists of the 19thand 20th centuries.  The current installation focuses on August Heckscher and his collection, which included works by the leading artists of his day. While Heckscher’s European works were primarily figure paintings, often revealing an interest in the exotic, his American paintings most often depicted the glories, both intimate and grand, of the nation’s physical environment.  Also on display is a selection of paintings on the theme of water that traces the development of American art from 19th-century realism to 20th-century abstraction. Works by Stan Brodsky, Roy Nicholson, Betty Parsons, and Christian White, The Heckscher Museum’s Celebrate Achievement Benefit honoree for 2012, reveal the Museum’s commitment to artists of Long Island.

The Heckscher Museum of Art, founded in 1920 by August Heckscher, serves the people of the Town of Huntington and surrounding communities. Through exhibitions of its permanent and loan collections of art and related programs, it seeks to provide inspiring and transformative educational experiences to encourage a broader understanding of our past and present and enrich the quality of life of the individuals it serves. The Museum Permanent Collection contains more than 2,200 works from the early 16th century to present. For information about The Heckscher Museum of Art, visit www.heckscher.org.