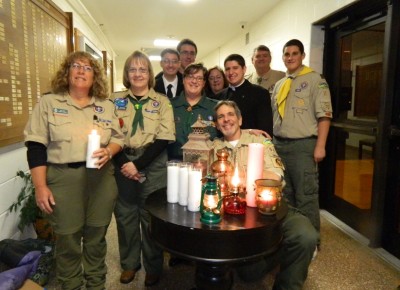 The Diocese of Rockville Centre’s Catholic Committee on Scouting in conjugation with Christ the King RC Church hosted a Peace Light Distribution Service on Sunday, December 9, during the 7 pm Advent Lessons and Carols. The service presider was Reverend Joseph Davanzo.  Approximately 300 people attended the service including scouts and Scouters from Nassau and Suffolk County in addition to the several hundred parishioners of Christ the King R.C. Church Parish.   After receiving the Peace Light, many participants brought the Light back to their own House of Worship including St. Patrick’s RC Church, Huntington  Our Lady of Mount Carmel RC Church, Patchogue;  ; Commack United Methodist Church, Commack; and Resurrection Byzantine Catholic Church, Smithtown

The tradition of the Peace Light started in Austria in the late 1980’s.  The “Peace Light” campaign was originally organized by the Austrian Broadcasting Co. and is still part of a great charitable mission for handicapped children and people in need.  Each year, a child from Upper Austria fetches the light – a live flame- from the Grotto of the Church of the Nativity in Bethlehem, where Jesus was born.  The light is then transported to Vienna, Austria under the auspices of the International Scouting Movement and distributed throughout Europe. In recent years it has also been brought to the United States.  The aim of the Peace Light is to bring people the light and the Peace Message, which encourages everyone, especially Scouts, to actively create peace in their own environment and communities. 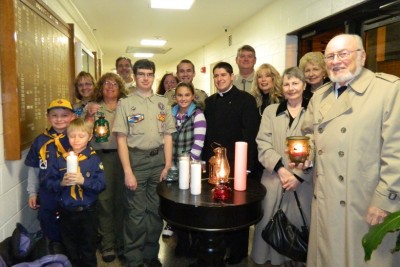 During the weeks before Christmas, Scouts distribute the light to now more than 30 European countries.  In recent years it has also been brought to the United States through the generosity of Austrian Airlines, and the cooperation of the Brooklyn Catholic Committee on Scouting and the Greater New York Council.  This year it is being shared throughout the United States and Canada, and is even being brought to South America.

In past years the Peace Light has been presented to Pope John Paul II and Pope Benedict XVI, Mikhail Gorbachev, King Hussein of Jordan, members of the European parliament in Strasbourg, and the United Nations Troops in Kosovo.  In December 2001, it was brought to Ground Zero.  The International Peace Light is a worldwide symbol of peace and brotherhood.  The light is given from one person to another as a gift with the wish for peace and forgiveness among all human beings.

Worldwide, communities seeking international friendship and peace is a special concern of all Boy Scouts and Girl Scouts, here and abroad.  According to the ideals of Scouting, everyone is encouraged, all nations and peoples, through personal contacts to actively create Peace and fear-free living in their environment by being tolerant towards different ethnic, cultural or religious groups.

Photo above right: Holding their lanterns and candles that are now lit with the Peace Light that was brought from JFK Airport to the  Peace Light Distribution Service on Sunday, December 9, at Christ the King RC Church, are members of Catholic Committee on Scouting of Suffolk County Council (BSA) who participated in the distribution service.

Photo above left: Holding their lanterns and candles that are now lit with the Peace Light that was brought from JFK Airport to the  Peace Light Distribution Service on Sunday, December 9, at Christ the King RC Church, are members of the community, and Boy Scouts and Girl Scouts who participated in the distribution service.