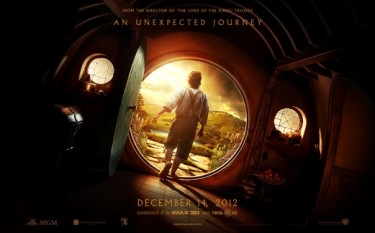 Peter Jackson may have become too attached to Middle-earth. Over the course of his Lord of the Rings trilogy, the director had over ten hours of screen time to explore the inner workings of Tolkien’s fictional world, ending the series with satisfying resolution, all loose ends tied, and no real reason to ever make another film. But wait! Before The Lord of the Rings, J.R.R Tolkien wrote The Hobbit, a much lighter, more kid-friendly novel, and so nearly ten years after wrapping up his trilogy, well, Peter Jackson just couldn’t resist returning to Middle-earth one last time. He treats this material like a kid let loose in a candy store; his enthusiasm is infectious, but after three hours, we can’t help but get a stomachache.

The Hobbit: An Unexpected Journey, part one of the new trilogy, opens by bringing us back to The Fellowship of the Ring: Bilbo Baggins is preparing for his 111th birthday party, while putting the finishing touches on his book, which tells the story of an adventure he went on 60 years prior. We then flash back to show that adventure, to a much younger Bilbo (Martin Freeman), a humble, quiet hobbit who keeps to himself and isn’t the kind of person to go on journeys across middle earth. Yet Gandalf the Grey (Ian McKellen) decides Bilbo is fit to be the thirteenth member of a crew he is putting together, which consists of twelve loud mouthed dwarves. Their adventure, we learn, will take them to the Lonely Mountain where, years earlier, the dwarves’ land was stolen from them by the sinister dragon, Smaug.

J.R.R Tolkien’s The Hobbit totals just over 300 pages, so when it was announced that Peter Jackson planned to stretch that story out into two, three-hour films, this seemed like an odd decision. When we learned that he would be stretching the story out into three, three-hour films, well, that was even stranger. Actually, the pacing of The Hobbit: An Unexpected Journey isn’t as big of an issue as we initially expected. Jackson constantly expands upon scenes and events mentioned only off-hand in the book, also throwing in bits and pieces from J.R.R Tolkien’s notes and appendages, as if he just can’t get enough of this material. Occasionally the film will get off on tangents that seem a bit unnecessary, and it does feel way, way overstuffed, but rarely is it boring to watch.

The problem with The Hobbit: An Unexpected Journey is that the story just isn’t interesting enough to sustain this much screen time. With the Lord of the Rings Trilogy, the stakes always felt extremely high. We were watching a battle against evil, and against a force that threatened the entire realm and all of its inhabitants. Nearly every battle felt life or death, not just for the characters on screen, but also for the entire fictional world. The Hobbit, on the other hand, is about a certain group of dwarves trying to regain control of a specific area of land that was taken from them. That’s it.

This creates several issues. First of all, it seems like a poor decision for Jackson to take us from The Lord of the Rings to The Hobbit, since the books were written the other way around. The result is a story that feels like a serious downgrade from the previous trilogy in terms of the complexity and importance of the plot, where as the books escalated from a small story to a much bigger one. We could try to shake The Lord of the Rings from our mind and just focus on The Hobbit as a standalone story, but given the countless references to the original trilogy, Jackson will hardly let us.

The second problem is that we’re watching a simple story, yet Jackson is never willing to treat it like one. Everyone seems to know that The Hobbit is a much lighter story than The Lord of the Rings. So why, then, is it given the same grand, epic treatment? The book was a brisk, light adventure. The movie looks and feels epic, but the story itself is far too small to match that. Jackson can’t decide if he wants to adapt the book, or make prequels to his original films which happen to contain some material from Tolkien’s novel. In the end, he tries to do both, resulting in a movie with a rather confused tone. Is this a small, intimate journey, or a grand, epic adventure?

The look of The Hobbit, on the other hand, is nothing short of historic. Peter Jackson shot the film at 48 frames per second, where as a typical film is shot at 24. What this means is that in a standard movie, for every second of screen time we’re actually seeing 24 images. With 48, we’re getting twice the amount of images and so, in theory, we’re seeing a much clearer, smoother picture. The result is what’s called HFR (high frame rate) and, combined with 3D, it is absolutely breathtaking, and worth seeking out over regular 3D. This is one of the most beautiful looking movies I have ever seen, and the closest a film has come to capturing the feeling of looking through a window and watching actual events take place.

What’s frustrating about The Hobbit is that there is so much excellent material here. Countless individual sequences, especially some of the climactic moments towards the end, are spectacular, and I can’t wait to watch them again. One scene, involving the reintroduction of Gollum, is one of the best I have seen this entire year. The Hobbit is a movie filled to the brim with great moments, but I can’t help but feel like they should have added up to something much more, and easily could have if this was a shorter, more restrained movie.

The Hobbit is an enjoyable family adventure film, and I’d recommend it to just about anyone for the holiday season. By the end, I was very much looking forward to seeing the next installment. But coming off of The Lord of the Rings series, which I consider to be three of the best movies ever made, The Hobbit is a tad disappointing. Even worse is the thought of what could have been, had Jackson not grown too obsessed with his own material, too unwilling to cut a single line of dialogue, and more open to the idea that adapting a 300 page novel into a nine hour trilogy may not be the best idea.