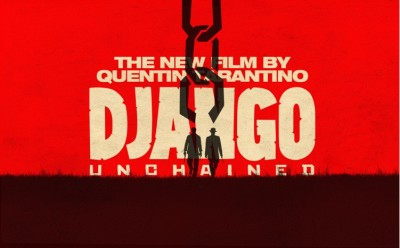 Django Unchained is a Quentin Tarantino western film, and anyone familiar with the director’s work should know exactly what to expect from that description alone. Just about everything we love (or hate) about Tarantino is on display here: the witty dialogue, the moments of dark humor, the music, the over the top violence, and of course, some of the best performances of the year. His last film, Inglourious Basterds, remains his masterpiece, a brilliant war epic that also serves as a reflection on good and evil, where we as an audience must question who we root for. Django Unchained never manages to top Basterds, nor does it have quite as much to say, but it’s still a bold, stylistic, wildly entertaining (if a bit overlong) time at the movies.

Jamie Foxx plays Django, a slave whose freedom is purchased by Dr. King Schultz (Christoph Waltz, who you might recognize as the “Jew hunter” from Inglourious Basterds.) Schultz, we learn, is a bounty hunter, and Django just might be able to recognize a group of convicts he’s looking for. The two partner up when Schultz agrees that, in exchange for Django’s assistance, he will help the man rescue his wife, enslaved on a plantation owned by Calvin Candie (Leonardo DiCaprio).

As is always the case with a Tarantino film, the highlight of Django is the dialogue. Here is one of those movies where a group of characters having a conversation over dinner is as exciting and tense as the film’s climactic shootouts. The majority of the film is driven by talking, setting up the film’s players, then letting them loose on each other. Also typical of Tarantino is the film’s unexpected moments of humor. One scene, involving an early version of the KKK is, strangely, one of the most hilarious things I’ve seen on screen this year.

With a western film like this, much of the success of the movie hinges on our ability to get behind the protagonist. In this case, Jamie Foxx is suitable as Django, the film’s hero, and we can’t help but root for him by the end. However, he isn’t even close to the film’s standout performance. That’s a toss up between Leonardo DiCaprio, playing one of the most terrifying and sinister villains of the year, and Christoph Waltz, whose character is charming and surprisingly different from his iconic role in Inglourious Basterds.

What’s also remarkable about Django is its sense of pacing. Like most Tarantino films, this is a long one, but it hardly feels like it (I always forget that Pulp Fiction is actually two and a half hours, when it feels like ninety minutes at most.) There are few scenes that feel unimportant, and even when we’re watching the characters talk on and on for long periods of time, they are such compelling people that I never want them to stop.

Although Django is one of my favorite films of this year, I can’t help but compare it back to the director’s previous work and question where it fits in. It feels most suitable to compare it to Basterds, as both movies are about a minority rising up against their oppressors and seeking revenge (though Kill Bill was certainly a revenge flick, too). What was brilliant about Basterds was that it sold itself as a Nazi killing extravaganza, where Brad Pitt and his team would murder and scalp Nazis for two hours, and audiences flocked to it.

What they got, instead, was a movie which did give us the Nazi killing, but was also an unexpected commentary on what it says about us for watching those kinds of movies. Take the scene where the Nazis are watching a propaganda film, Nation’s Pride, and laughing at the sight of American soldiers killed. We look at them in disgust, and yet is that not exactly what we ourselves have been doing throughout the previous two hours? Are we any more in the right than they are?

Django Unchained sells itself as a slave-owner killing extravaganza, and well, that’s pretty much what it is, with not a lot more to it. Coming off of Basterds, it’s disappointing that Django doesn’t have quite as much to say. It’s a pretty simple story about a man going on a heroic quest to rescue his wife, and a reflection on the horrors of slavery, but Tarantino’s thesis isn’t nearly as interesting as it has been in some of his previous work.

On the other hand, the film does just about everything it’s trying to do, and is a ridiculously entertaining, pulse pounding ride. In this case, it’s not so much about the story being hold, as it is about the way it’s being told. With Django, we have a story that’s relatively simply, borderline predictable, but all of the elements of the production are so strong, and Tarantino’s voice is so recognizable, it simply cannot be ignored. Though it may not be quite as masterful as some of his past work, Django Unchained is still an easy recommendation, and one of the most entertaining movies of the year.