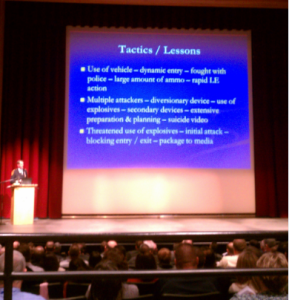 school safety seminar for local school officials.  The purpose was to discuss shootings at schools, universities and other venues across the United States.

The seminar was held at Suffolk County Community College Brentwood campus. During the seminar police officials offered guidance to school administrators so they could enhance their current security strategy.

The first portion of the seminar  provided information regarding previous shooting incidents, including Sandy Hook Elementary School, Virginia Tech, and Columbine High School. Also included on the agenda was; the history and definition of active shooters.

SCPD stated that the threat is evolving. They explained that active shooters have looked at previous events and learned from them.  This is known because the shooters have stated that and in some cases  have left behind journals.  These disturbed individuals have stated that they had the desire to outdo previous attackers.  To outdo  a previous attacker, you have to have a higher body count or you have to focus on victims that are more shocking than prior attacks.

Police Commissioner Webber began by stating, “Our children are our greatest resources and it’s our job to protect them.” He explained how things have changed after the attack at Columbine H.S.   Commissioner Webber continued, “When I became a police officer 40 years ago, there was little if any cooperation between police and schools.  This all changed on April 20,1999 when two teens shot their fellow students and teachers at Columbine H.S.”

“As tragic as this day was” continued Webber, “it unfortunately was not an isolated incident.  There has been other shootings.  It is our sincere hope that we in Suffolk County never endure the heartache of a school tragedy like those seen elsewhere.”

During the 4 hour seminar they discussed recent shootings; steps that can be taken to prevent these incidents from occurring; enhancements to the current security strategies; and plans for coordinating a response if a shooting incident was to happen here.

County Executive Steve Bellone,who was speaking as both the County Executive and a parent of three young children explained that he felt devastated about what recently happened at Sandy Hook Elementary School. Bellone continued,”While we know that we can’t prevent every kind of attack, we have an obligation to do everything that we can do to protect our children and that is what today is about.”

Legislator Sarah Anker from the 6th Legislative district, briefly addressed the crowd. She  praised everyone for getting this seminar together so quickly and for the good response from School Districts.  Her background includes experience in schools as a BOE member for the Mount Sinai school district and as a PR director for other local schools.  She also shared that she is the mother 3 children. Legislator Anker recently met with her staff to think about what more can been done to keep schools safe. One idea they came up with was to install a panic button in every school.  She is working on legislation to examine the feasibility of installing emergency notification systems in schools throughout Suffolk county. She explained that this is different than calling 911 because it would increase the response times by minutes. The idea is that the panic button would be linked directly to the Suffolk County Police Department.  Legislator Anker explained that they are working out the logistics such as the lack of cell service in some buildings and ways to fund the legislation.

Chief Stuart Cameron,  who is a 20 year veteran in Suffolk County PD has spent a great deal of time studying active shooters and their cases.  He began, “one thing that concerns me most that we’ve never had occur in Suffolk county is the potential of an active shooter.  I’ve seen communities and how they’ve been effected by those events.  What I notice when I see the media coverage is that they will find someone who says on camera, I never thought this could happen here.” He continued, ” For a police department to think that way would be negligent. Unfortunately, you have to think if it could happen there, it could happen here. We need to be as prepared as we can and the preparedness has to be ongoing” .

One recommendation was for Schools to start with the NYS School Safety Guide.

According to SCPD an active shooter is a person who enters a venue intent upon killing as many people as they possible can.  As stated by the Chief Cameron, “historically in America that has involved guns but it could involve other weapons”. Cameron continued “what we’ve  seen in china through gun control the incidents involve using machete or knives”.

At the seminar is was stated and restated that when it comes to an active shooter incident seconds equals lives.  The goal for the police department therefore is to get in there as quickly as possible and for schools to have systems in place that delay the shooter.

There is not one specific profile but there are some commonalities. According to recent studies, the vast majority of active shooters are males. It is believed that somewhere between 95% and 98% are males.  Many of them perceive that they are trying to right a wrong.  Many of them think what they are doing is right.  They somehow think they have a moral obligation to do what they did. 98% of active shooter events involve only one shooter.

Attacks can come from within or outside of the school population.  In the cases that come from inside attackers, at least one other student knew about the attack before it occurred. In two-thirds of the cases two or more students knew about it. This presents a unique opportunity to prevent an attack.

The SCPD officers discussed specific attacks and the methods used.  We have decided to omit those descriptions from our reporting.

Prior to discussing the specific prevention strategies and what Suffolk County has done to address this threat, the media was asked to leave  the seminar. As was stated by Chief Cameron, “it is never a good idea to publicize what we are doing because people can adapt their tactics”.

Cold Spring Harbor School district had three representatives at the meeting including Superintendent Judity Wilansky.  Superintendent Wilansky stated, “We found it to be extremely informative and helpful in addressing security issues.” When asked what was the most interesting aspects of the seminar, “she stated it was the effort that law enforcement invests in learning from each tragic event and how, based on that knowledge, they have compiled recommendations and have developed protocols for improving student safety.” Superintendent Wilansky continued, “we will be meeting with our capital improvement committee to discuss security enhancements and consider some of the recommendations that were made at today’s meeting. We will also revisit our school safety plans in light of these recommendations.”

The Elwood School district had representation at the seminar. They Stated, “we felt that the SCPD did an outstanding job in building upon the relationship and communication they have with school districts. Their presentations were informative and pertinent to the work that must be done in school districts concerning the re-evaluation of safety protocols and procedures”.

Superintendent James Polansky attended the seminar along with several other representatives of the Huntington school district.  He has been reviewing the district’s safety procedures on an ongoing basis and will continue to do so. Although he feels that his district has good procedures in place, he is always looking for new ideas and ways to do even better.  In addition to working with his safety and security teams he is also working with his teams of mental health professionals to remain diligent.   Superintendent Polansky stated, “I felt the SCPD did a good job of relaying the information. The presentation was informative and right to the point.”