The Melville Fire Department responded to a motor vehicle  accident with  the driver trapped after a Lincoln Town Car crashed into a  tree on Bagatelle Road near Sorrel Hill Court, Sunday evening, January 27, at  about 5 p.m.  Melville volunteer firefighters used heavy rescue “Jaws of  Life” tools to remove both doors on the driver’s side and free the  male patient who was pinned in the wreckage.  The patient suffered  traumatic injuries and was transported to the Nassau University Medical Center  by the Melville Rescue Squad. Under the command of Melville Fire Chief Michael  Carrieri, 20 firefighters and rescue personnel were on the scene with a heavy  rescue truck, three ambulances, fire police and paramedic unit. 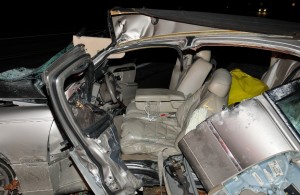 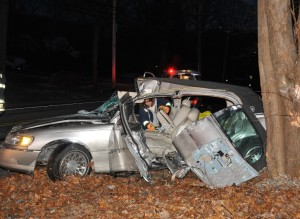