The Melville Fire Department responded to several accidents that occurred on the North Service Road of the Long Island Expressway, west of Bagatelle Road in Melville, at 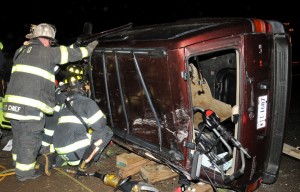 around 11 p.m., Friday night, April 19.  Firefighters used heavy rescue extrication tools (Jaws of Life) to remove two occupants trapped in an overturned sports utility vehicle. The SUV struck a light pole while traveling westbound on the expressway, then crashed through a fence overturning onto its side on the service road. There was also a nearby rear-end collision that resulted in two additional injured on the service road.  About 35 fire/rescue personnel were on the scene with four ambulances, an engine, heavy rescue truck and fire police, under the command of Chief Michael Carrieri, and Assistant Chiefs Mike McKeefrey and Jason Bernfeld. An additional ambulance was requested from the Dix Hills Fire Department, and ambulances from Melville and Dix Hills rescue squads transported four patients to Huntington Hospital, North Shore / Plainview Hospital, and Nassau University Medical Center. 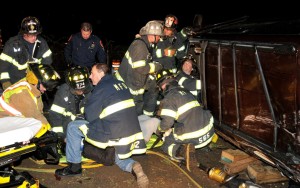