Suffolk County Crime Stoppers and Suffolk County Police Second Squad detectives are seeking the public’s help to identify and locate the female suspect who attempted to use credit cards that were stolen from a woman’s purse while she was at work.

On Friday, April 12, 2013, between 9:00 a.m. and 1:00 p.m., an unknown person removed two credit cards from a woman’s pocketbook which she kept next to her desk while she was at work in a Melville office. On April 16, the victim was notified that an unknown person attempted to use both of the credit cards to purchase $6,000 worth of merchandise at the Apple store in the Walt Whitman Mall, located at 160 Walt Whitman Road in Huntington Station.

Surveillance video shows that the suspect is a heavy-set black female with blond hair. She was wearing black pants with a flowered shirt and a black jacket on top. 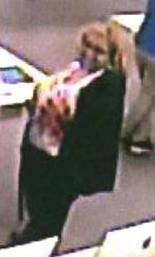 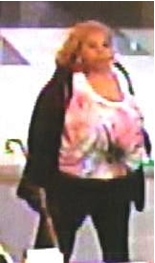