Suffolk County Executive Steve Bellone was joined by Suffolk County Chief of Detectives William Madigan, Parents for Megan’s Law Executive Director Laura Ahearn, Director of Probation Patrice Dlhopolsky and members of the Suffolk County Legislature to announce that initial arrests have been made under the Suffolk County Community Protection Act, sex offender legislation that provides for the toughest monitoring and enforcement program in the nation.

The Community Protection Act, which was enacted earlier this year, includes a partnership with Parents for Megan’s Law (PFML), the most respected organization dedicated to the prevention of sexual abuse in the region. It provides law enforcement and PFML with the resources they need to verify that registered sex offenders are in compliance with all elements of sex offender law and provides for heightened monitoring of the over 1,000 registered sex offenders who reside in Suffolk County.

Bellone announced the arrest of eight registered sex offenders who were found to be in violation of sex offender laws as a result of the Community Protection Act. They are:

Brian Riley (Level 3 Sex Offender) – Arrested for failing to report for his 90 day appearance. Convicted in 8/1998 in Nassau for Sexual Abuse 1st Degree on a 7 year old female child.

Kevin Griffin (Level 2 Sex Offender) –  Arrested for failing to have photo taken. Convicted in 4/1990 for Kidnapping 2nd and Sodomy 1st by forcible compulsion.

“Parents rely on up to date sex offender registry information to keep their children safe,” said Parents for Megan’s Law Executive Director Laura Ahearn. “As a tool, the registry is only effective if it is accurate. This program will not only ensure accuracy, but send a message to registrants that they must comply with the law. We are proud to be part of a team dedicated to protecting our most vulnerable in Suffolk County, brought together through the leadership and support of County Executive Steve Bellone and the Legislature.“

“Protecting children from sex offenders is a high priority for the Suffolk County Police Department,” said Police Commissioner Edward Webber.  “Special Victims Section detectives will continue to work closely with other county agencies to enforce the Community Protection Act, a proactive approach to ensure that sex offenders are complying with laws.“

“I want to thank the members of our Police and Probation Departments for taking swift action to protect our most vulnerable residents,” stated Deputy Presiding Officer Wayne R. Horsley. “I am confident they will continue to be vigilant in working with Parents for Megan’s Law for the safety of our children.” 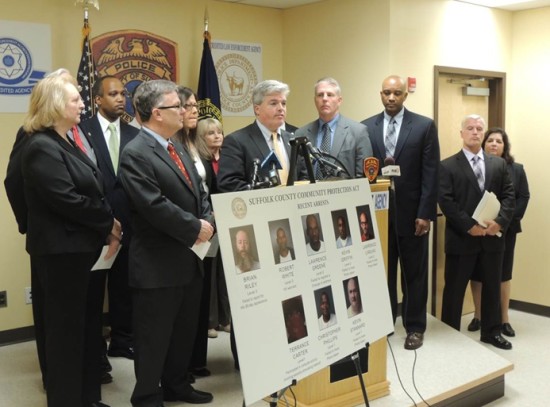