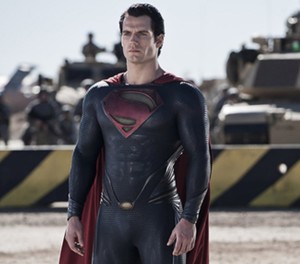 In recent years, superhero blockbusters have become all about humanizing the characters and grounding the story in our world, shedding away any and all campiness. This trend began to pick up steam with Christopher Nolan’s “Batman Begins,” and it’s hard not to make the comparison between that film and “Man of Steel.” Both reboot their respective franchises, give a fresh take on their hero’s origin story, and with a more serious tone than previous installments. But “Batman Begins” is about a regular man who uses his wealth to become a vigilante. How do you apply that same sort of formula to an indestructible alien with virtually no flaws or weaknesses?

Director Zack Snyder’s answer is to focus on the emotional journey of Clark Kent (Henry Cavill), with “Man of Steel” being less about his relationship to individual characters like Lois Lane (Amy Adams) and more about his relationship with humanity as a whole. It’s an interesting take on the character, in that we never really get sequences of Clark training and learning to control his powers as we usually see in these kinds of movies. Instead, Clark must ask himself how the world will react to the existence of someone like him, and to question whether or not he should reveal himself, and if so, when is the right time?

Right from the opening scene, “Man of Steel” is a science fiction movie through and through, more than it’s even a superhero movie. These sci-fi elements are fully embraced, to the point where at times it feels like a full-blown alien invasion blockbuster. On those terms, it’s a damn good one. This makes sense when considering Superman’s back story, probably the most fantastical of any of the current superheroes. It’s interesting to see a version which explores this element more in depth, though it might be initially jarring to some viewers.

As far as the spectacle goes, “Man of Steel” is mind boggling, and full to the brim with fan service. The action is well choreographed and easy to follow, though at times relying a bit too much on shakycam. Despite being so fantastical, as we’re essentially watching aliens flying around fighting each other, it somehow feels grounded. We feel the weight of every punch, and fully understand just how powerful these characters are in relation to each other and to the humans. Scenes like these have potential to come across like a live action cartoon with no stakes, but Snyder never allows that to happen, which is truly impressive.

Like many summer blockbusters, though, “Man of Steel” is extremely overstuffed, suffering from some serious pacing issues. Nolan’s “Batman Begins” allowed us to spend a full hour with Bruce Wayne before he even became Batman, and though this might be frustrating at first, it’s part of why we were able to connect to Wayne so much in that trilogy. With “Man of Steel,” though, the pacing in the first act is all over the place.

First we’re watching a lengthy prologue in Krypton. Next thing we know, we’re 30 years in the future, watching Clark as a grown man. Within minutes, we’re flashing back to him as a kid. Then we’re back to him as an adult, but wait, now we’re back to him as a kid, a few years older than before. It’s difficult to focus on anything when we’re constantly jumping back and forth like this. Why not spend just a bit more time with Clark as a kid, with all the scenes in order, rather than constantly flashing back?

All of these individual scenes are well done though, especially the sequences of young Clark interacting with his father (Kevin Costner). On an emotional level, this is a great back story for the character, which helps us connect to him despite being an indestructible alien. But I’d like to see a version of the movie that allows us to spend just a little more time to soak in these sequences before moving on to the next thing, and I’m crossing my fingers for a director’s cut somewhere down the line (Snyder’s “Watchmen” film suffered from pacing problems as well, but this was completely fixed in the longer director’s cut).

This problem also pops back up again in the last act of the film. The action in this movie is spectacular, and some of the best in a modern summer blockbuster, but there’s simply way too much of it. I really never thought I’d be complaining about a movie having too much action, but there’s a point in the last act where it simply grows tiresome. After a while, we get our fill of Superman destroying things, and I just wish Snyder could have replaced one or two of these action scenes with some more character development. In a movie like “The Avengers,” the large amount of action is still broken up with dialogue and character beats. Here, at a certain point, the action is virtually non-stop.

Overall, Snyder has done a fine job rebooting a classic character for a new generation, even if the film isn’t quite as strong as recent reboots like “Batman Begins,” “Iron Man,” or “The Amazing Spiderman.” Because of some pacing issues, we don’t always connect to the characters on an emotional level as much as we do in a film like “The Dark Knight.” But this portrayal of Superman is memorable and, even if not a modern day masterpiece, it’s still an entertaining summer blockbuster.  As someone who has never really been into Superman in the past, “Man of Steel” got me interested in the future of this franchise, and in that respect, Snyder’s film is a success in my mind.