Movies On The Lawn – Wreck-It Ralph 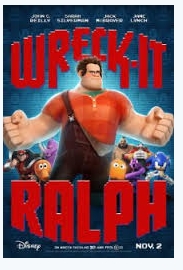 This Summer’s Movies on the lawn will kick off with Wreck-It Ralph at Heckscher Park on Monday, June 24.

WRECK-IT RALPH (Rated PG). This animated feature is about a video game villain that wants to be a hero and sets out to fulfill his dream, but his quest brings havoc to the whole arcade where he lives.

All movies begin at darkness (between 8:30-9:00 pm). It is suggested that you pack lawn chairs. In the event of inclement weather, performances will be held indoors at JAMES H. BOYD INTERMEDIATE SCHOOL Auditorium, 286 Cuba Hill Road, Elwood and begin at 7:30 pm. For more information, call 631-351-3112.

On Thursday, July 25th there will be a drive in at Crab Meadow Beach, featuring FREE WILLY.
This movie is about a young boy who learns that a beloved killer whale is to be killed by its aquarium owners – and the boy risks everything to free the whale.
Come early for the Marine Life displays by Cornell Cooperative.

Back to the lawn on Monday, August 5th at Dix Hills Park. This natural amphitheater setting (by the pool parking lot) will feature the Walt Disney Production of D2-THE MIGHTY DUCKS (Rated PG).
This is about hockey coach Gordon Bombay and his beloved team that reunite with five new players to form Team USA. They are up against the world- including the big boys from Iceland. Can they win against the world? Find out on August 5!
There will also be Tours of the Dix Hills Ice Rink starting at 6:00pm.

On Thursday, August 22nd, it’s back to the drive-in at Crab Meadow Beach to see the 1978 original movie classic –SUPERMAN. This star studded cast features Christopher Reeve, Marlon Brando, Margo Kidder and Gene Hackman. This epic blockbuster is about an alien orphan who is sent from his dying planet to Earth, where he grows up to become his adoptive home’s first and greatest super-hero.

One Response to Movies On The Lawn – Wreck-It Ralph