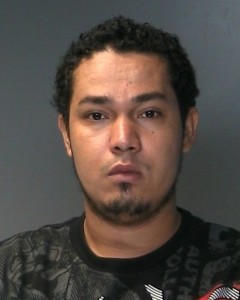 On July 23, Suffolk County Police arrested a man for fondling a female customer at a 7-11 store in East Northport.

The 48-year-old victim, entered the store, located at 223 Laurel Road at approximately 2 a.m. to buy a cup of coffee. When the woman exited the store, she was followed outside into the parking lot by a male patron. The man grabbed the woman and began inappropriately touching her. The woman struggled to get away but was prevented from doing so as the suspect held her and began pushing her towards the back of the building.

During the struggle the suspect attempted to kiss the woman several times and exposed himself. The woman was able to break free and alerted the 7-11 clerk that she was attacked.

Second Precinct Patrol officers, K-9 officers, and Second Squad detectives established a perimeter, but did not immediately catch the suspect. At approximately 7:25 a.m. Officer Frank Muoio was canvassing the area and observed a man matching the description in the area where the attack had occurred. Officer Muoio arrested the subject, Juan Buesoramos and transported him to the Second Precinct.

Buesoramos, 25, of 222 Laurel Road, East Northport, was charged with Sexual Abuse First Degree, and Criminal Possession of a Forged Instrument Second Degree, for presenting a counterfeit United States Resident Alien Card to officers while he was being interviewed.

Buesoramos is scheduled to be arraigned July 24 at First District Court in Central Islip.